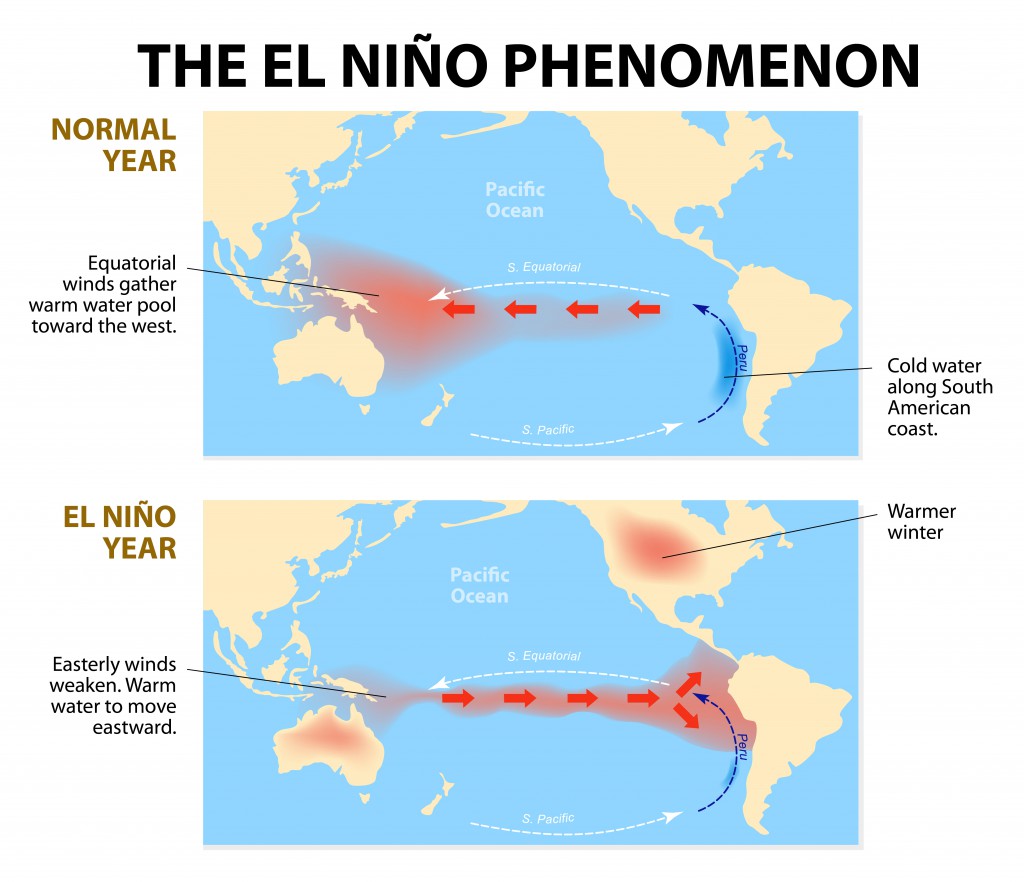 It’s not often that a weather phenomenon becomes part of the pop culture zeitgeist. But that’s exactly what happened in the late 1990s, when El Niño became a household name—and even a character played by Chris Farley on Saturday Night Live. El Niño is a blanket term for the effects of an unusual warming of water in the Pacific Ocean that occurs once or twice a decade. A massive El Niño occurred in 1997-1998, unleashing record rains in California, deadly tornados in Florida, and a brutal drought in Indonesia, thus landing the term firmly on the radar (no pun intended) of millions of people around the globe. With its whimsical name, El Niño became a punchline—the cause of anything and everything that might be going wrong (hence that Chris Farley sketch on SNL). But El Niño was no joke then. And it still isn’t, despite the headline of this post. That liberal paraphrasing of a classic Prince song refers to particularly strong El Niño conditions predicted by the National Weather Service for winter 2015-2016—the likes of which haven’t been seen since 1998. With extreme weather—running the gamut from droughts to flooding rains—likely to occur across the globe this winter, we can expect to see the supply chain affected in several areas. El Niño may serve as the ultimate test of supply chain risk management and resiliency. Those companies that safeguard their supply chains by successfully planning for potentially catastrophic events will emerge with the least negative impact from El Niño. Here are the key strategic efforts that resilient supply chain practitioners take to ensure they stay in front of risk. Identify Alternative Transportation Routes Massive flooding can literally wash away critical infrastructure in your supply chain. By investigating where El Niño is likely to wreak the most havoc, and seeing how those locations align with your supply and distribution networks, you can plan for—and utilize—alternate routes. Care should be taken to understand each node in your supply chain—rail lines, ports, choke points, distribution centers—and identify potential risks associated with each. For example, the Panama Canal has already restricted the size of ships permitted to pass through it due to drought conditions created by El Niño. As a result, some shipments moving from Asia to the Gulf Coast and eastern ports of the United States will be forced to reduce cargo loads to meet the new requirements. The current restrictions affect about 20% of the traffic typically moving through the canal, but the ripple effects will likely be felt far and wide. A strong supply chain strategy should always incorporate contingency plans. If those “Plan B” efforts aren’t already in place, the time to start defining them is now. Assess Inventory Positions With the kind of disastrous weather conditions El Niño can bring, stock-outs will be inevitable for many companies. While “lean” has been the mantra of supply chain management for decades, having the foresight into extraordinary events like El Niño may necessitate deviating from standard inventory positions. In fact, many smart companies are stockpiling key products and components from suppliers that lie squarely in El Niño’s crosshairs. Special attention should be paid to products that you source from one supplier with no redundancy—and their related revenue streams. As you examine the full range of your inventory positions, assess the stock-out exposure risk each product has and build inventory accordingly for those that would be impossible to procure if that supplier—or the suppliers to that supplier—should experience significant effects from El Niño. Establish Strong Supplier Relationships Speaking of suppliers, there’s no greater test of your supplier relationships than a natural disaster. When faced with a crisis situation like El Niño, many companies have learned the hard way that their partnerships with suppliers aren’t as strong as they thought. That’s because disruptive events affecting a supplier elicit countless queries from their customers. And they’re likely to favor requests from customers with whom they have the strongest relationships. Similarly, when you find the need to work with an alternate supplier, having an existing positive relationship may push you to the front of the queue. Whether they’re dealing with a key supplier or an alternative supplier, companies who successfully manage risk in their supply chains also understand how prepared their suppliers are for disruptions. This results from clear communication about continuity and contingency plans.

Do you anticipate that your supply chain will be affected by El Niño? If so, what kind of planning have you done to ensure resiliency and responsiveness? Share your best practices in the comments!