As many of you know, upon the merger last year of BILK ERP and SoftMoore, BILK-Moore became the largest and richest enterprise software company in the world. The merger assured BILK-Moore customers that the company’s slow system integration, underwhelming performance, lack of reliability and increasing costs remained not only an integral part of their service offering, but would become even more prevalent.

The combined company offers an extensive product line of uninspiring supply chain software modules that are sure to confuse and infuriate even the savviest of CIOs and supply chain executives. But last month’s incarceration of BILK-Moore chief executives, Hans Ahnnansoahnn and Eli Moore, hoisted customers’ hopes that perhaps a revolution was finally in view. Unfortunately, today’s announcement of a legal appeal has thwarted such dreams.

BILK-Moore maintains the innocence of its two executives and unequivocally denies the violation of any business laws. While its practices may seem at times questionable and its products without merit, BILK-Moore is confident that the litany of charges will be dropped…. on account of the small print at the bottom of its contracts. If you would like to follow BILK-Moore’s executives as they attempt to appeal their guilty verdict, watch "SuiteMates". And oh, by the way……April Fools! 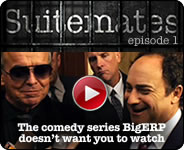 “SuiteMates” is our new 6-part comedy video series that premieres today. Accomplished actors, Kevin Pollak and Ray Wise, play two imprisoned executives of the fictitious ERP vendor, BILK-Moore. The series represents the growing industry-wide frustrations with ERP supply chain suites, and parodies the tactics big ERP vendors employ to convince customers their products work. We hope you enjoy the series, and take it in the spirit in which it was intended.