Gartner Top 25 after seven years - what have we learned?

This is the 3rd blog post (here's the 1st and 2nd) I have written on the Gartner Supply Chain Executive Conference and, judging by other commentators, perhaps I should have started with the topic of the Top 25 supply chains. But I needed some soak time. There is always a flurry of activity after the announcement commenting both on the list and short-comings of the process. But what gave me pause was Kevin O’Marah’s statement about his motivation for creating the Top 25 list while at AMR Research. Kevin said that it was to raise awareness of the practice of supply chain management and to reward those who are doing well. I am sure that there were some less pure motivational elements too, but before we cast the first stone, let us remember that we all have to earn a living. I do not know Kevin well, but I know him well enough to accept that his primary motivation was true. Supposedly Henry Ford once said “Look after the customers and everything else will take care of itself.” And all the comments about the list itself and the short-comings of the process of developing the list is testament to the fact that Kevin’s primary goal was achieved. As I commented in my first blog on the Gartner conference, perhaps the most interesting presentation in this context was the one about Howard Schultz, CEO of Starbucks, writing a companywide email congratulating everyone for being recognized for their supply chain transformation which got them onto the list, albeit at position 22. And yet I do have some issues with the list. Several of them commented on by others. Bob Ferrari on his Supply Chain Matters blog comments that:

The overall list itself has many familiar names and global brands. It would be nice for one year to have a small or mid-market company make the listing. Outsourcing the major portions of your supply chain provides a high ROA, and that can get your company a good shot for making it on the list. Speaking of effects outsourcing, once again, there is no presence from major process manufacturers (BASF, Dupont, Dow Chemical) and that remains a disappointment. A lack of recognition of any major global contract manufacturer, those that own the majority of production and in some cases process design assets (Foxconn, Fextronics, Jabil) also remains disappointing. While the overall list has some non-U.S. names such as Samsung and Inditex, it should include other capable names as well.

In reply to a fairly negative comment on my 1st blog about this year’s Gartner Supply Chain Executive Conference that implied deliberate bias toward their clients by Gartner I wrote (with some editing here) that:

There is no doubt that the center of gravity has shifted [away from the US] since AMR (now Gartner) first started the rankings 7 years ago. At that time, AMR had hardly any presence outside of the US. Although Gartner has a wider reach, it is still very Western economy focused and also [Gartner’s] supply chain practice was much smaller than [AMR’s]. The senior people at Gartner are aware of these short comings. Kevin O’Marah, who started the ranking, will be the first to admit that there is a lot of subjectivity to the rankings. Also companies have to apply to be included and there is a lot of work, on the part of the company that goes into the being evaluated. So if a company does not apply (and yes, it is far more likely that a Garner customer will apply than a non-Gartner customer) it won’t even be considered. In other words, if Apple didn’t apply [to be included in the ranking] it wouldn’t be #1. I have a bit of a problem with this approach. As importantly, 50% of the overall score is based on financial metrics, 25% on “peer” opinion, and 25% on Gartner analyst opinion. When many of the companies in China and India are private and reporting is less rigorous this poses a bit of a problem. In addition, when few people in the West have heard of Haier and Huawei it is unlikely that they will get many peer votes. And as you state, do the Gartner analysts really know the companies in Asia? Especially if they are not customers.

But I ask myself if I would rather have had the Top 25, with all the flaws we have all identified, over the past 7 years or not, and my immediate response is that we – practitioners, analysts, bloggers, and vendors - are all better off for having had the Top 25. But I would like to encourage Gartner to make 2 changes:

Here are some suggestions for metrics. (These can be viewed in our free benchmarking service on the Kinaxis Supply Chain Expert Community. (Registration is required, but there is no fee.)

Let’s see how this year’s Top 10 fair. One note is that not all industries are included in the benchmarking service so McDonalds will not appear in the analyses below. 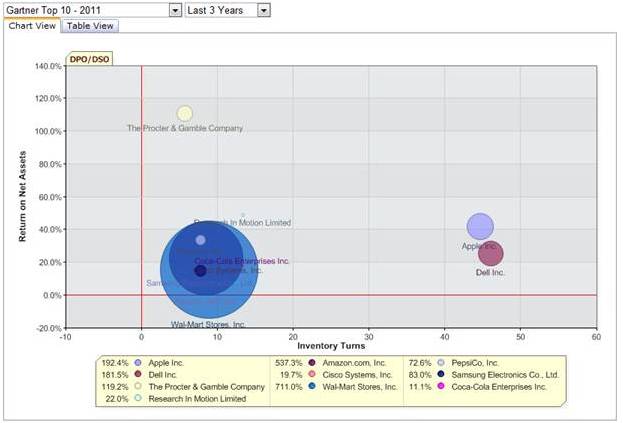 This graph attempts to show how companies balance different metrics. This graph also illustrates why RONA is better than ROA because inventory efficiency is already captured in the inventory turns KPI. The other element captured in this graph is cash-to-cash in the form of DPO/DSO which determines the bubble size. The DPO/DSO ratio is used instead of cash-to-cash because inventory is already accounted for in the inventory turns KPI. In a B2B environment I would consider a DPO/DSO ratio of 1 good. From this graph we can see why P&G, Apple and Dell are ranked so high in the Top 25 list, but we can also see that P&G has focused on net assets whereas Apple and Dell have focused more on inventory turns. My interpretation is that P&G stands out again because of the DPO/DSO ration of close to 1.2, which can be seen in the legend. Amazon and Wal-Mart have large DPO/DSO ratios because of being retailers, but also because of long DPO. We can also look at how free cash flow as a ratio of revenue has trended over the years. 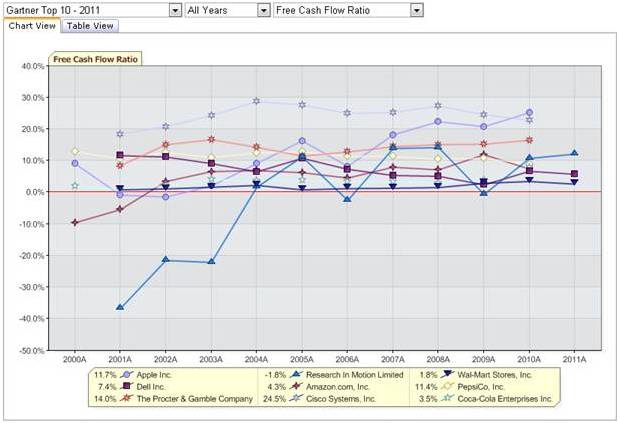 Note that Samsung is missing from this graph because it does not provide the necessary financial information. However it also indicates why Cisco, despite its recent issues, has had a high rank over a number of years both because of their consistency and their cash generation. On the other hand, Apple’s performance over the last few years is clear as are RIM’s challenges. P&G has been both consistent and near the tops for a number of years. Another graph I like to look at is revenue/employee, more so to see the trend rather than the absolute value, thought he absolute value is pretty interesting too, but has an industry bias. For example retailers will always have a higher ratio of employees. 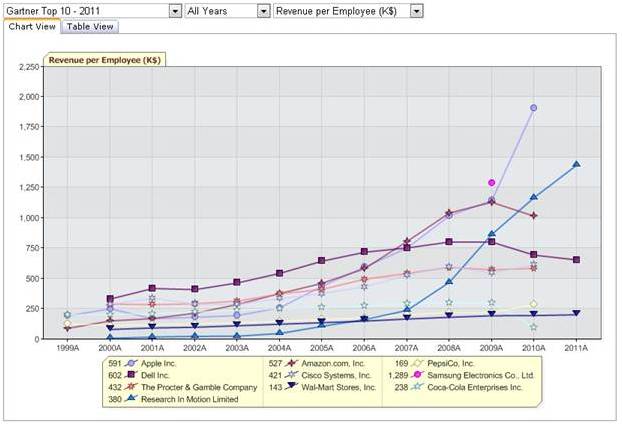 But my favorite is to get an overview based upon a number of metrics such as below.

Note that the Best-in-Class and Worst-in-Class are the maximum and/or minimum of the entire data set rather than for the values displayed in the table. For example for inventory turns 58 is the best value achieved over the past 3 years whereas the Dell achieves the best average performance over the past 3 years of 46 days. Note that there is a preponderance of green toward the top of the list perhaps indicating that the Gartner rankings, amongst the companies included in the analysis, are correct after all. 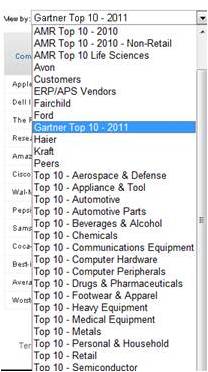 Please try out the benchmarking service. It is free. When registering you can select your company. If you are a private company you can enter your own ratios. (No-one else will be able to see the information you entered.) Of course this is also useful for divisions of larger companies that may want to compare themselves against both the corporate entity and other companies closer to them in terms of industry. There are also standard lists such as the top 10 from the Gartner Top 25 over the past few years and industry specific Top 10 lists based upon revenue. Separate groups can be created for customers and suppliers. In summary, I’d just like to say congratulations to all the companies in the Gartner Top 25, it is a great achievement. I would also like to thank and congratulate Gartner on their excellent efforts in compiling the list, warts and all. Please try out our benchmarking service and let me know what you think.