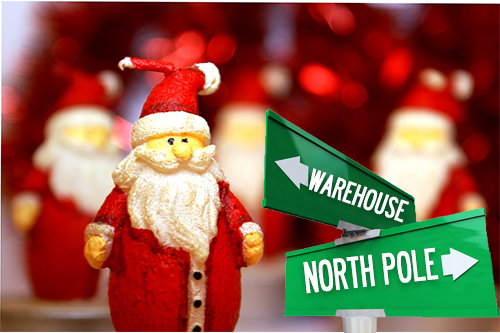 As pointed out by Alexa, Santa does operate one of the most complex supply chains ever imagined.  And as important as Mrs. Claus’s role as operations manager is, I’d like to focus on the role of the elves…the unsung heroes. The legend is that the elves furiously make toys all year long, but the reality is that the demand has outstripped the North Pole’s capacity for many years.  Over 100 years ago, Santa and Mrs. Claus had to rethink their operations.  They had to start to rely on consumer products companies such as Mattel, Hasbro, Lego and others, who could build toys throughout the year with their resources and instead of waiting for a demand signal they could push those toys out into their distribution network for storage.  The big benefit for Santa is that he immediately extended his distribution network and was still able to achieve a very, very high level of customer service.  He was sure that if they contracted carefully with these toy makers, there would be more and more happy children on Christmas Day every year. As a result, the elves’ role was going to change dramatically– they were going to become Replenishment Planners.  Their job is now to help these contract manufacturers maintain the correct inventory levels throughout the complex distribution network.  Additionally, they are responsible for redistribution of inventory between the distribution centers when it becomes apparent that they will need more Barbies in Chicago and more Legos in Ft. Lauderdale.  They also monitor storage and handling capacity risks and escalate any critical breaches to Mrs. Claus.  Lastly, in the off-season they generate a high-level warehousing plan to make sure that the network can sustain all the inventory that will be produced over the coming year and escalate potential service-level exceptions to the Sales & Operations Planning meetings. So, cheers to you, Elves! Distribution Requirements Planning is a messy job, but I can’t think of a better pointy-eared solution than you! Happy Holidays!