One size does not fit all.

For a while way back in the late 1980’s and early 1990’s, before Supply Chain Management (SCM) was a discipline, I worked for one for the management consulting companies doing business process reengineering (BPR).  These were the days when most companies still manufactured in the West and outsourcing was in its infancy, and I was flush with theoretical knowledge gained from PhD research in Industrial Engineering and Management Science.  As I have written in the past, I had an epiphany about the effect variability (called stochastic in the theoretical literature) has on operations in general, while much of the material being taught was based upon deterministic (non-variable) approaches because – my interpretation – they are much easier to analyze mathematically and to write computer programs to optimize. I have many stories of both the brilliant and absurd manner in which decisions were made that had major operational impact on companies based upon the collective theoretical knowledge of me and my colleagues. One of the most interesting was when we were brought in a year after the acquisition of one French company by another to analyze why the projected savings from the merging of the operations of the two companies were not being realized while customer complaints had sky rocketed. It turned out that one of the companies had used finished goods (FG) inventories to buffer against demand variability while running very efficient factories with few change-overs and long production runs.  The basis for this design was that their customers expected fast delivery of a fairly standardized product range with few opportunities for configuration. The net effect was bloated FG inventory levels and fairly high excess and obsolete (E&O) charges.  This was the company that was taken over.  The other company used manufacturing capacity to buffer against demand variability, running very efficient downstream operations with lean FG and delivery logistics.  Clearly the asset utilization of their factories was lower, but they had a more configurable product and customers were prepared to wait a little longer to get their order in the configuration they wanted. Interestingly when we analyzed historical return on assets (ROA) for the two companies they were fairly similar, but when we analyzed return on net assets (RONA), which excludes inventory, we deduced that the first company, the one struggling with profitability, was more efficient.  We still had a lot to learn. Before the merger the bloated FG inventory and high E&O were identified as the primary sources of operational improvement.  In addition, because the acquiring company had a strong focus on efficient downstream logistics, it was decided to manufacture products in factories near the major demand regions for those products.  Of course hindsight is great and I have to admit that it took us something like 6 weeks to identify the real issue, so I mean no disrespect to the people who had done the initial analysis, but the sourcing and distribution decision was absurd.  All of a sudden products that had a fairly high degree of configuration were being manufactured in factories designed for long production runs with management that focused on asset utilization which lead to even higher E&O and poor customer service because inevitably the configurations built were not always in high demand.  Other fairly standard products were now being manufactured in factories designed for short production runs and the long production runs necessary for margin capture of the standard products was creating havoc in the order to delivery times of the more configurable products that required shorter production runs.  It is little wonder, in hindsight, why the savings were not being realized and why customer service was suffering. We managed to get the company to focus on product segmentation, rather than geographical segmentation, resulting in fairly standard products being manufactured and distributed by the operations (supply chain) of the company that was acquired, while the more configurable products were manufactured and distributed by the supply chain of the acquiring company, since this is the way the supply chains were designed and operated.  This meant a reshuffling of over 50% of the products, which had a major impact on operational results. I bring this up because I came across a really good article by Matt Davis in the Supply Chain practice at Gartner titled “Frameworks to Design and Enable Supply Chain Segmentation” published on May 19, 2011.  This builds upon an earlier article by Matt and Wayne McDonnell titled “The Seven Steps of the Supply Chain Segmentation Journey” published on February 2, 2011.  Since subscription is required for both, I thought that, with Gartner’s permission, I would share some of the observations from both articles.  While comprehensive, I must admit to finding the degree of segmentation perhaps a little overly complex for all but a few companies with very sophisticated supply chain functions.  It is always good to have lofty aspirations, but my suggestion would be to go through several iterations starting with 2, maybe 3, configurations. Let’s start with the competing operational levers typical in any supply chain design of cost, speed, and service, all the elements of which can be seen in the anecdote I gave above, which are defined in slide 3 of the “Frameworks to Design and Enable Supply Chain Segmentation.” 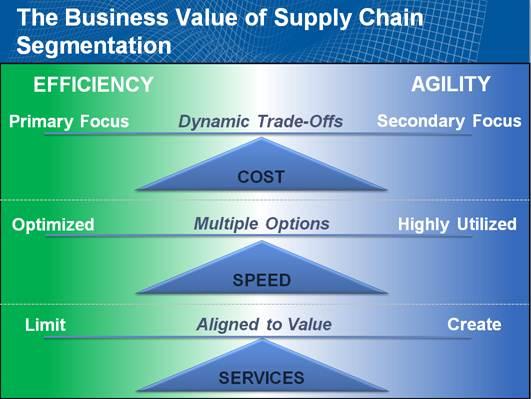 As interesting to me are some of the tools Gartner suggests for analyzing and segmenting the supply chain.  I am a strong proponent of Coefficient of Variation (CoV), so I was pleased to see this come up as one of the techniques suggested by Gartner, though in a different guise of demand predictability rather than demand variability.  I have used this technique myself to get the bottom left quadrant of a 2x2 matrix to be “bad” and the top right to be “good”, although I used the inverse of the CoV or a measure of demand stability.  I am not sure how Gartner suggests to measure demand predictability, but it may be through mean absolute percent error (MAPE).  I am not sure I would agree with this approach as it would confound the underlying demand variability and the sophistication of, or lack of, the organization’s demand forecasting function.  But what I did find very important is the manner in which Gartner suggests in slide 6 of the “Frameworks to Design and Enable Supply Chain Segmentation” of performing the analysis along several dimensions: demand predictability, process, life cycle, and SCOR. 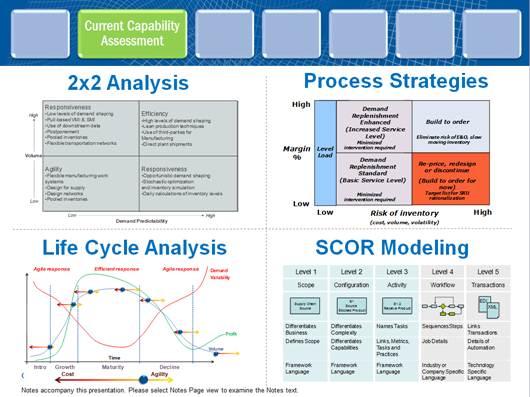 The life cycle analysis in the lower left hand corner of slide 6 of the “Frameworks to Design and Enable Supply Chain Segmentation” I found particularly insightful (because I had not thought of using the 3 dimensions of volume, profit, and variability on a single graph) in illustrating that in fact the policies used to operate the supply chain need to vary over the life cycle of a product.  Which seems obvious, but is seldom practiced. 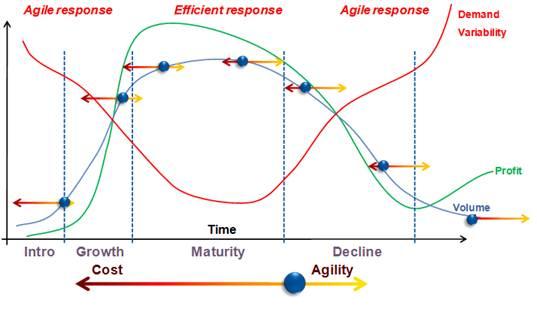 This brings me back to some of the more recent blogs I have written in which I have emphasized the importance of agile response or response management as a technique for dealing with demand uncertainty/variability.  With increasing short product life cycles, especially in the Consumer Electronics segment (and therefore throughout the High-Tech/Electronics segment), the time spent in the “Maturity” stage in the graph above is becoming increasingly shorter meaning that most of the time the supply chain needs to be operated in “Agile Response” mode, rather than “Efficient Response”.  Agility is about “first mover advantage” which is achieved by

I must commend Gartner, particularly Matt Davis, on this toolkit.  I’d really like to hear from you about the techniques you use to segment your products and customers, how frequently you perform this segmentation analysis, and how many supply chains you operate. Perhaps most importantly of all, what is the value you are deriving from the analysis, and how important is agility and responsiveness to your long term profitability?

Airth
- March 19, 2012 at 5:19am
Fascinating summary, very similar at many stages to things we've implemented with some very new and useful ideas as well, great to see such a coherent discussion