Much has changed in the business environment, let alone the technology environment, since the origins of the term S&OP by Oliver Wight nearly 30 years ago.  From a business environment perspective we have only to look at the rise of the BRIC countries – Brazil Russia, China and India - let alone the rest of Asia first as a source of cheap labor for the Western world, but now source of demand that is expanding far more quickly than Western economies.  Many of the companies that used to be sources of cheap contract manufacturing have now developed their own brands and market presence, such as Huawei, Lenovo, and Acer, competing against Western brands not only in Asia but also in the Western economies.  One of the biggest shake ups in the pharmaceutical industry is the rise of manufacturing of active pharmaceutical ingredients and generics in India in particular.  The same is true of many other industries.  The greatest change for the Western brand owners is that the majority of their supply chain is external to their organization, and therefore external to their ERP system.  And yet they are as dependent on an effective and efficient supply chain for good financial performance as they ever were before outsourcing.  The rise of interest in S&OP is largely driven by the need to regain control of these global, multi-tier, multi-enterprise supply chains.

Microsoft was incorporated in July 1981, a month before IBM announced its first personal computer. There was no "PC industry" back then, just tools for hobbyists. And because IBM didn't think the PC was a serious product, it made the biggest blunder of its history: It left control of the operating system to tiny Microsoft and the central processor chip to Intel Corp. While IBM is still a strong and viable company, its business and revenue streams have changed dramatically since the early 1980’s.  Microsoft Windows was first released in 1985, but it wasn’t until Windows 4.0 that widespread adoption occurred. Microsoft released the first version of Excel for the Mac in 1985, and the first Windows version in November 1987.  The key point is that S&OP predates Excel, which many advocate as the technology of choice to support S&OP. 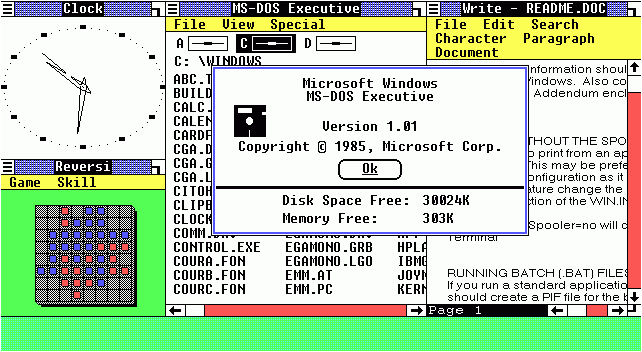 While the history of the internet can be traced back to the 1960’s in terms of communications protocols used by the US military, but in the early 1990’s it was still a niche used by the US military and a few research organizations, with broad adoption only beginning in the mid-1990’s. And yet 10-15 years later we have the rise of cloud computing, the emergence of terms such a social media, and the rise of brands such as Google, Facebook, and Twitter, all of which are changing the manner in which we communicate and exchange data.  The FAX was invented because postal services were too slow, but the items exchanged where still paper, only the delivery mechanism changed.  Now we exchange not only the details electronically, but increasingly we also exchange the meanings and nuances of the spoken word through electronic means because they are both more efficient and effective.

And yet much that is written about Sales and Operations Planning harks back to its origins nearly 30 years ago.  Without a doubt the biggest challenges of S&OP are still related to process and people.  What I am continually surprised by is that the S&OP process advocated by many of the process consultants is rooted in what was possible 30 years ago, when S&OP was first performed on paper using double-entry concepts borrowed from accounting.  Clearly there were strong limitations on the amount of data that could be analyzed in a timely manner, even given that S&OP used to be run on a quarterly basis.  But the very sequential process of demand planning, supply planning, pre-S&OP consensus, and executive S&OP meeting reeks of a process that was developed at a time when the technology available to support S&OP was double-entry accounting paper.  In case there is any misunderstanding, let me repeat that I have no question that successful adoption of S&OP is about process, people, and technology, in that order.  I think it is time to rethink the S&OP process. Actually, let me rephrase that: It’s time to think of the planning process as a continuum across time, product, and functional dimensions.  S&OP is the process to drive this ‘unified theory’ of planning. Recently Tom Wallace commented that “Cross-functional collaboration is not a pre-requisite for successful S&OP: it’s a result”. I agree, though I imagine that the CEO had more concrete objectives in mind when approving the adoption of an S&OP process.  And yet the five step S&OP process being advocated by many process consultants only provides for monthly cross-functional collaboration in “consensus” meetings.  No, no, no.  How can Marketing decide on a promotion plan without close consultation with Finance, Sales, and Manufacturing early on in the process?  What if the drop in revenue for a particular product line being observed by Marketing is due to a capacity shortage leading to customer service issues and consequently a drop in market share?  But all too often Marketing will make a decision to run a promotion, not because they are stupid, but because they don’t have ready access to all the information and they have no way of discussing and evaluating the impact of their decisions in a timely and cross-functional manner.  Doing so in a monthly consensus meeting is both ineffective and inefficient, and way too slow for most industries, particularly the high-tech/electronics industry where prices can drop as much as 5% over a month, new products are introduced every 3-6 months, most of the supply chain is external to the brand owner, and supply lead times have been extended because of off-shoring and outsourcing. Let us use the advances in technology, particularly the Internet, to redefine the S&OP process to be more collaborative, more consensual, more timely, more dynamic.  Let’s get to the point of assuming collaboration as a base requirement and drive S&OP to delivering real tangible benefits.  As long ago as 2003, Charles Poirier included the following diagram in his book.  It is time we put this into practice and make S&OP a truly collaborative process throughout the cycle, not just on select days during the month. 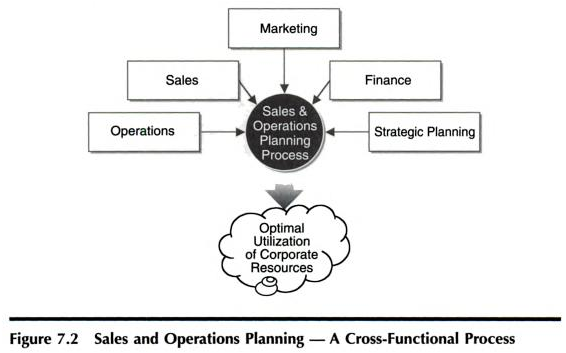 The other issue I have with current S&OP practice is cadence.  I have no question that it makes sense to bring everyone together on a regular basis to surface risks and mitigation strategies that require executive approval.  I have no question that there is great value on providing executives condensed summaries and allow them to challenge assumptions and the mitigation strategies chosen by the S&OP team.  But why are these activities only carried out on a cadence?  Given that the technology is available, why are they not carried out on a continual basis?  I work for a software company.  Do you really think our CEO waits for a monthly status meeting with his VP of Sales?  They have close to daily calls and the topics are not just about opportunities about to close, but they are also about hiring plans, marketing plans, lead generation, and market penetration.  Effectively they run a near daily S&OP process.  Isn’t this something all CEO’s want; a constant finger on the pulse of the business?  They don’t need to know every detail, but they sure as heck want to know early and often about significant opportunities and risks. And when real opportunities and risks are identified, I don’t know of a single CEO that would be satisfied with a process that would only surface these at a monthly S&OP cadence meeting before taking action. I know this has been a bit of a rant, but I am a bit frustrated.  Often when talking about the role of technology in S&OP I think of my father-in-law, who is a dear man, but only learned to use a computer in his 60’s.  To him technology is a bolt-on, not an integral part of the process. When he receives an email he prints it out and deletes the email.  He has a big metal filling cabinet in his home office where he stores the emails he wants to keep.  Until recently he would often write back to us on paper, often by hand but sometimes on the computer, sometimes including a printout of our original email on which he had written comments and questions.  If he was pressed for time he would FAX us his reply.  All of you who are smiling quietly in amusement at this anecdote, how many of you are running S&OP meetings using print-outs of PowerPoint or Excel?  How many of you have the ability to create and evaluate scenarios in seconds so the consensus meeting can be interactive rather than a ‘presentation’ followed by frantic activity to evaluate issues raised by the executives during the meeting? Yesterday, we announced RapidResponse, S&OP edition, which goes a long way to realizing my vision of what true cross-functional collaboration is all about, incorporating Finance, Marketing, Sales, Engineering/Design, and Operations, incorporating long term and near term planning, incorporating high level volume planning and detailed mix planning.  All in a single application.

Jim Bentzley
- April 26, 2017 at 4:33pm
Hi Trevor,
If you dig into the objections that you have against S&OP you will see that they have been addressed by the process creator, or at least the consulting firm that bears his name. Having done S&OP, or IBP, for the past 15 years, the cadence is normally monthly however the leadership team sets parameters on when to alter that cadence. For example, my CPG company immediately ran an entire cycle within a single week when Huricane Katrina hit the US. We simply needed to be responsive and waiting a month wouldn't cut it. Additionally the Owner of the process consistently set dates for deliverables from the process on key things he thought were needed now and couldn't wait a month. The key is making the process work for the business and not the business working for the process.
For your gripe about non-collaboration outside the S&OP meetings, that too is not accurate. Integrated Reconciliation is not just the 4th meeting in the process, it is expected to be real time. Marketing would never be presenting a plan in an S&OP meeting without first getting input from other key players like Sales and Finance. The real time integrated reconciliation of these functions is expected and there is a large amount of process guidance on running scenarios with all functional input prior to bringing them into an S&OP meeting.