Spreadsheets - A Look Back

Do you recall products such as VisiCalc, Lotus 1-2-3 and Quattro Pro? They were the names of very early versions of spreadsheets, which some claim, were the first killer apps for personal computing devices back in the 1970s-1980s. They helped launch the personal computer, or PC, as a viable business tool. They were however, not the first. In fact, the concept of a spreadsheet on a computer goes back to 1961, when Professor Richard Mattessich, from the University of California at Berkeley, pioneered the development of computerized spreadsheets for use solely in business accounting. Early mainframes, using a programming language called FORTRAN IV, were the forefathers of what we use today. Before computers and data analysis became the norm, physical paper accounting ledgers were used. They contained large pages with rows and columns to hold data. The ledger consisted of two facing pages, or a spread, but were treated as one page to give more columns for data. This eventually led to the term "spread sheet" which stuck, became spreadsheet, and then was applied to software applications that had rows and columns for data. Spreadsheets have come a long way, and have evolved into major business applications. They became one of those items that makes major generational changes, the way the smartphone and tablet have today. Spreadsheets are not without limitations and issues that can be critical for a business, especially in supply chain management. As a newcomer to this world, I have learned just how complex, dynamic and complicated a supply chain can be. There are many moving parts and pieces that have to be orchestrated carefully, in order for a business to maximize investments in raw materials and components that will become products. Unfortunately, all too often, companies rely on spreadsheets, push them to their limits, and use them in ways in which they never were intended. A poor procurement choice based on stale data can lead to a decline in profits. There is a major issue with the lack of revision control and auditing. Many times I have seen file names such as 2015Q4Budgetv3.xlsx, so if I grab v3, and decide to make changes, I may or may not decide to save it as v4. Also, unless the file is kept in an environment where it needs to be checked out for revision protection, two people could be working on their own copies simultaneously. That won’t end well. And, who has final audit control? From our eBook, S&OP in the 21st century, “An audit of 50 corporate spreadsheets in 2007 revealed that 94% had errors... one for $100 million!” If no audit service is used, or that function does not exist within an organization, the results could likely be ominous. An error in forecasting made by one function will almost always have an impact on at least one or more other functions. That could mean excess inventory sitting in a warehouse, gathering dust or depreciating. Should one spreadsheet depend upon another spreadsheet’s data, the opportunity for error and inconsistency grows immensely. Also, add in the fact that there is no security control within a spreadsheet; it has to be at the file level. If someone has write access to a spreadsheet, they have access to all of the sheets, and the data. There is no way to segment access, unless yet another spreadsheet is created. Trying to manage all of this can be a nightmare. Even the best-trained staff, can commit errors of some sort. Multiple silos of spreadsheets are as bad as business silos in general. I’m reminded of this graphic I have seen in some of our Kinaxis literature, which uses the Microsoft Excel® symbol to represent a spreadsheet: 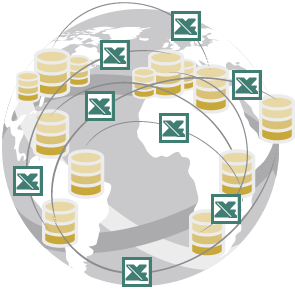 Simply erase one of those lines, which would represent some sort of disconnect, and the complex system flirts with a major failure. The cause and effect relationships in the supply chain are disconnected, and there can be a greater disparity between what is forecast vs. what the actual demand is, for example. Lastly, depending on the software and revision being used, spreadsheets do have a finite limit to the amount of data they can store. You can’t throw more hardware at them to expand their capacity. The potential is there to hit a dead end with data storage. For the record, I do not hate spreadsheets, or think unkindly about them. They are great personal and business productivity tools, when used for what they were designed. I use them all of the time for various needs, with great success. Their functionality, and charting, has made my life easier many times in managing certification programs, and producing critical metrics data. What I don’t recommend is ever using a business tool, like a spreadsheet for the wrong purpose. I will admit to using a flat head screwdriver on a Phillips head screw. However, I would not use a hammer to bash a Phillips screw into a piece of wood. As part of the theme of looking back, another major generational change, which had a substantial impact on the music industry, was created 34 years ago. On Saturday, August 1, 1981, at 12:01 a.m. Eastern Time, MTV launched, with the words "Ladies and gentlemen, rock and roll," and a tagline of “You’ll never look at music the same way again.” The first video they played, Video Killed the Radio Star by the Buggles, began a revolution. As Kinaxis leads a revolution in supply chain management and S&OP processes, we’re doing our best to replace misused, disparate spreadsheet technology with our industry-leading supply chain software product, RapidResponse®, and the powerful feature of “What-if Analysis” scenarios. This can lead to smarter decisions and an improvement in supply chain performance. I thought you might enjoy this video from our 2013 Kinexions Conference, a fitting parody of the Buggles’ hit.