Fine wine for your supply chain

[/caption] There used to be a commercial (with Orson Welles for Paul Masson wines) on television back in the 1970’s advertising that they would “sell no wine before its time.” This implied that they wouldn’t release any wine until it reached full maturity and perfection. I thought this would be a good analogy for the concept of time phased release of supply orders to the supply chain. Shouldn’t we want to release orders only when they reach full maturity and perfection? The temptation is usually there to release supply orders as far out into the planning horizon as possible so as to give suppliers more time to deliver. But what actually happens when we do that in an MRP planning environment? It artificially lengthens lead times, and consequently, we are releasing more supply orders into an already overloaded supply chain. It seems to me that we should build a recovery reschedule of the past due purchase orders and cut the lead times to the bone, only releasing new supply orders in the near term when the master production schedule is more mature and firm. The APICS definition of Time Phasing is:

The technique of expressing future demand, supply and inventories by time period. Time phasing is one of the key elements of material requirements planning.

This definition to me appears to be overly simplistic and deserves further expansion into specific scenarios and benefits. The definition doesn’t say anything about the benefits of time phased release of supply orders in small bites. It should also include the benefits of time phasing the release of supply orders, based on precisely defined lead times in the near term, resulting in greater ‘maturity’ and ‘perfection’ of quantities and due dates. I think the old adage, “How do you eat an elephant? One bite at a time,” applies here. The time phased releasing of supply orders at the latest possible release date that would satisfy the minimal lead time requirement would result in only releasing supply orders when the production schedule is firm. This enables better accuracy in release quantities and due dates, and less disruption in the master production schedule. 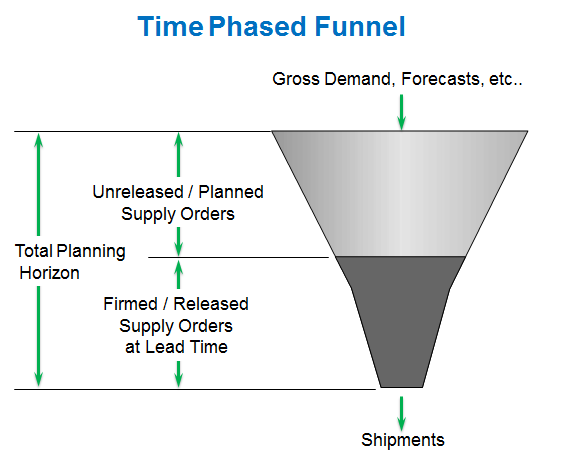 We can look at our entire planning horizon pictured above as a time phased funnel depicting firmed or released supply orders at lead time (dark shading), unreleased or planned supply orders (light shading), and gross demand and forecasts input and the resulting shipments to the customer. This planning horizon is funnel shaped because forecasts are generally more optimistic further out into the future and then start to lean out when approaching lead time due to forecast consumption by actual demand, capacity limitations of the master production schedule, and actual customer shipments. If we take a closer look at the dark shaded area (firmed or released orders), we can probably say that a large portion of our planning horizon for customer delivery has, in effect, been relinquished to the mercy of our suppliers. So shouldn’t we want to limit that dark shaded area so that we can maintain as much control of our planning horizon as possible? Another thing that can be said for this dark shaded area is that it is the labor intensive portion of your total planning horizon because of near term supply chain volatility.  Suppliers that can’t deliver, lack of capacity, acts of God such as the earthquake in Japan, all of these and more can contribute to near term fluctuations to your master production schedule,which result in overtime throughout the company in order to resolve the issues quickly.  Buyer/planners in particular, perform lots of work expediting and rescheduling released purchase orders. Despite the temptation to artificially increase lead times and therefore release more supply orders earlier, this can ultimately result in the buyer/planners increasing their own maintenance workload… sometimes beyond their means. Most buyer/planners I know are responsible for three or four thousand parts. In the light shaded area (unreleased or planned orders), your suppliers have no control over your master production schedule. You do. In this area of the funnel, volatility, resulting in additional laborious tasks is not a problem. The MRP software handles it automatically. All planned orders are automatically rescheduled during every MRP run. So shouldn’t we want most of our time phased funnel to be light shaded? In this area, we can also favor and easily maintain the formal system over the informal system of order launch and expedite hotlists. Think about this the next time an overloaded supplier asks you for more lead time to dig himself out of a backlogged hole. You just might be supplying him with a bigger shovel.