The selected image "fortune-teller-gartner-supply-chain-top-25.bmp" is invalid.

Last May, 2013, I wrote “Bold Predictions for the 2013 Top 25 Supply Chains”. I'm proud to say that three of my five bold predictions were “directionally correct”. 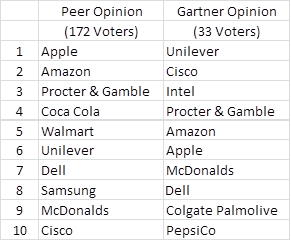 Okay, this didn’t happen, but I’m still giving myself a thumbs up.  Amazon moved from at total composited score of 5.4 to 5.86.  Amazon has been doing a lot of build outs for both Web Services, Hosting and Fulfillment centers.  ROA at 1.9% in 2013 kept them from #1.  However, I think 2014 is the year the investments bring positive news. My approach for this year's Bold Predictions for the 2014 Top 25 Supply Chains As the page turns on 2013, and the annual Gartner Supply Chain Summit approaches, we flock to the warm weather of Scottsdale, AZ.  I’ve looked into my crystal ball to make my 2014 Predictions.  Okay, not so much a crystal ball, but I’ve made some adjustments to improve my Bold Predictions.  I am going to put more stock in some common profiles: Supply Chain leaders who deliver conference keynotes and revenue growth. I did a search on supply chain conferences from summer 2013 to April 2014.  Keynotes and main speakers are telling their supply chain story.  At the Gartner Australia conference, both Unilever and Haier spoke.  At the SCM World conference in Miami, Nestle, Lenovo,  BASF, Clorox, Under Armour and Caterpillar gave thought provoking presentations on their supply chain.  At the upcoming 2014 Gartner Supply Chain Summit, I see Schneider Electric, 3M and Colgate Palmolive are speaking.  Getting the success story out improves the Peer & Analyst Voting, 50 % of the total vote.  Having ran the High Tech practice at AMR Research, I even recall some supply chain leaders presenting, either in person in Boston, or through analyst calls, their supply chain strategies and successes.  Some companies provide insights to the Gartner reports, from a case study, participation in a quantitative research study, or sometimes a via quotes in key articles.  Most of these companies are going to rise in the Top 50 2014 ranks. Then there’s the 50% Financial, which is broken into three parts: Inventory Turns, Return on Assets, and Revenue Growth.  Before we go running to review the Annual Reports for a bunch of companies, there’s one profile I like to consider, Revenue growth is the most leading indicator of financial performance.  Apple, Ford, Amazon, Lenovo had great revenue growth in 2013.  The automotive sector companies also saw good revenue growth, which could put BMW, Volkswagen, Hyundai Motor, or Tata Motors into the 2014 Top 50. Check out tomorrow's post for what I predict as: