Don’t Let Your Supply Chain be Like the Death Star 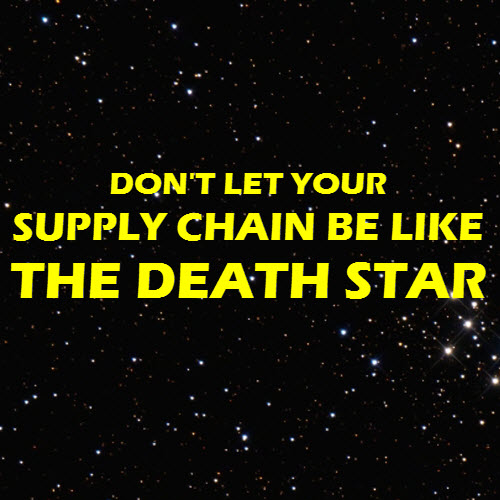 It seems now that I’ve found a correlation between Star Wars and supply chain, I just can’t stop myself from writing another blog on the topic. My earlier post, May the Force Be With Your Supply Chain, explored how you can use the force (aka attunement to market fluctuations) to realize value by developing a demand-driven supply chain. In this blog, I’m going to cover another topic – why under no circumstances should you let your supply chain be like the Death Star. That’s no moon, it’s your supply chain! While your supply chain may at times seem as large and complex as a super weapon the size of a celestial body, the one thing you don’t want them to have in common is the propensity to be brought down by one small oversight. In the case of the original Death Star, that oversight was failing to see the risk a single X-Wing fighter could pose to their thermal exhaust shaft. Luke Skywalker was able to destroy the entire space station with a pair of well-placed proton torpedoes. While that threat likely isn’t going to strike your supply chain, what does pose a very real risk is the failure to see potential areas of weakness. In other words, not having end-to-end supply chain visibility. If you can’t see all the way up or down your supply chain, how can you possibly spot those X-Wing fighters taking aim at your operations? To avoid total annihilation, or in your supply chain’s case, an unanticipated disruption, ensure you have an appropriate plan of attack, including implementing tools that give you the best chance at success. Imagine how different the Star Wars story line would have been if the Death Star itself had been able to alert Darth Vader the second it realized the Rebels were about to attack? That’s actually a reality for your supply chain. By having a software solution that enables continuous and concurrent planning, monitoring, and responding, you’re able to know what’s headed your way before it strikes. You also have the agility to put counter measures into action quickly, thanks to exception-based alerting and high-speed analytics. In Episode VI: Return of the Jedi, the Empire gives us another reason you don’t want your supply chain to be like the Death Star. Their second attempt at creating a moon-sized battle station, this time over Endor, failed just as miserably as the first. Only it wasn’t because of lack of visibility. They knew the Rebels were coming – planned for it in fact – and relied on their defensive shield to protect them. Their fatal flaw this time around was they only relied on just that one SLD-26 planetary shield generator. Don’t they know the risks associated with just having a single source of shield protection? It’s the same type of risk your supply chain faces when you only use a single supplier. Just look at what happens when a small group, including adorable furry locals, rise up against a regime. Complete destruction of your Death Star. Again. The threat geo-political unrest represents is very real. So are numerous other unanticipated risks like natural disasters, pandemics, war, accidents, and the list goes on. If you’re reliant on a single provider and the unexpected happens, how large and how long will the impact be on your supply chain – and ultimately on your bottom line? Things might have turned out incredibly different for Darth Vader and Emperor Palpatine had they only realized the risk of having just one shield generator. Utilizing multiple sources in different geographic locations would have meant they could have easily diverted power from the generator under attack to one in a secondary location, possibly preventing their epic Hollywood deaths. For your supply chain, being able to source critical components from a secondary or even tertiary supplier is a key tenant in any good supply chain risk management strategy. Another critical factor in your risk management strategy – your ability to rapidly analyze the situation and run multiple what-if scenarios to determine your best course of action. Spoiler Alert – the following section contains information about the latest Star Wars movie. It’s a lesson the evil doers in Stars Wars failed to learn. In the latest franchise installment, The Force Awakens, the First Order thought they’d one up what the Empire had done previously – building a weaponized, mobile, ice planet. No mere moon-sized weapons for them. Unfortunately, the Starkiller Base met the same tragic end as the Death Star and Death Star II. Why? Because they failed to run appropriate what-if simulations. What if a single fighter pilot found a critical weakness and was able to exploit it? If they’d taken the time to develop a fully integrated risk management strategy and plan for those unanticipated risks, they might have realized earlier they were making the same mistake as the bad guys in Episode IV: A New Hope. But that’s the movie business for you. Whether it’s anticipated, uncontrollable, or unanticipated risks, having the ability to know about potential issues sooner, and the capability to respond faster, is paramount to minimizing supply chain disruptions. Don’t wait for Rebel forces to take down your supply chain. Develop a solid risk management plan before catastrophe strikes!