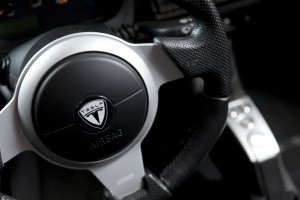 If you’re a supply chain nerd like me, you’ve probably noticed that Tesla’s been making some pretty big waves in the auto industry. It seems Tesla is poised to be the first company to truly take advantage of a new market segment. People are looking for vehicles that are environmentally responsible, technologically advanced, safe, sexy, and affordable to the average Joe. Their new Model 3 meets all of this criteria, and has a range about double that of comparable vehicles. They’ve nailed the customer requirements so well that they’ve received over 320,000 pre-orders in the first week, even though deliveries aren’t slated to begin until the end of 2017. To meet this demand, Tesla hopes to reach a production rate of 500,000 vehicles per year by 2020. Wait… what? 500K per year, but not until 2020? Even if they managed to accelerate their production schedule to achieve 500K per year at the end of 2017, they still have at least an 8 month backlog before they even deliver their first car. On the surface, this seems like an unprecedented supply chain challenge. Their level of success at building this new supply chain will make or break their business. To make it even harder, due to the incredible amount of money involved and the sex-appeal of the product, they’ll be undergoing their supply chain revolution with a level of public scrutiny normally limited to the latest iPhones! The media is already speculating that they’re in over their heads, and that delays are inevitable. What could possibly make Elon Musk so confident? It’s simple. This has been done before, over a hundred years ago in fact! Ford was pumping out 500,000 vehicles a year by 1915*, and they were doing it without the benefits of modern supply chain technologies. Toyota reached that rate in the mid ‘60s*. What’s interesting is, the Tesla of today has a strategy very similar to that of Henry Ford. Ford wanted to produce a car that the people who built a car could buy. He made it affordable not only by developing an efficient manufacturing process, but by paying the workers enough to buy them. Tesla is following a similar model, building their cars in America, and pricing them to be affordable to the common man. They’re also focused on building the complete end-to-end value chain to keep their destiny in their own hands, rather than relying on low-cost subcontractors or low-cost labour markets like many high-tech or other automotive companies would. For more details on this strategy, check out Kevin O’Marah’s (CCO at SCM World) recent blog. Will Tesla be able to successfully apply this 20th century strategy in a 21st century market, when the competition is all running in the opposite direction? Myself, I could see this massive gamble going either way, but I’m rooting for Tesla. I’ve already told my wife my next vehicle will be a Model 3, so hopefully they can deliver. Either way, it’s certainly a story to watch and learn from! It’s not often you come across a live case-study with such enormous potential to revolutionize an industry. What do you think about Tesla’s strategy? As a consumer, do you have enough trust in Tesla to spend $1000 to reserve your spot in an already enormous line? I’d love to hear from you in the comments below. *My production rate numbers come from Wikipedia so may not be the most reliable. But hey, it's on the internet, so it must be true!

Alexa
- 4월 13, 2016 at 9:19오전
Great article Andrew! Tesla doesn't have the greatest track record when it comes to on-time delivery, so I wouldn't be surprised if they ended up having to push back the date on this launch, but like you, I'm hoping they succeed. I'm also interested in how this surge of electric vehicles is going to impact the woefully lacking (at least in my area) electric charging station infrastructure. Sure there's the odd charging station here or there, which is fine for the limited number of electric vehicles I see around my neighborhood, but if Tesla's Model 3 hits it big--it could become a major problem. Not everyone has the ability or access to charge at home overnight. I'm a condo dweller myself so would have very limited options if I owned any kind of electric vehicle.
Patrick
- 4월 15, 2016 at 1:14오후
My next car will most probably be electrical. But ideally on a sort of fuel cell avoiding the need to charge and produce all this electricity. Or the supply chain complexity will extend beyond the car manufacturing itself.
Lauren
- 4월 16, 2016 at 9:08오후
Well said Andrew. I'd also like my next car to be a Tesla so I'm rooting for their plan too. Recent visit to the Tesla showroom in a Florida mall did not disappoint. Yes it's a mamoth challenge. But innovators like Elon Musk show us something we can all take inspiration from. While it may seem an impossible challenge, it's too important not to try.
Andrew
- 4월 18, 2016 at 10:08오전
Hey Alexa, you're right that infrastructure will be the next big challenge to keep up with this automotive revolution. The Canadian government has called for proposals to start developing new charge stations and is ready to drop quite a bit of cash if the right proposal comes up. And, the NDP are going to debate the Leap Manifesto, which basically proposes we stop investing in fossil fuel infrastructure and invest only in technologies of the future, to help us get there sooner. That kind of approach would radically change our countries economy.

It's really remarkable how one company's innovation has the potential to change the way we look at the future!