As many of you will know, the AMR Top 25 supply chain lists have been published since 2004.  While undoubtedly improvements could be made in terms of geographical coverage, revenue coverage, industry coverage, and KPI’s used, all of which AMR is working toward expanding, the AMR Top 25 has been a great way of generating discussion and dialog about what constitutes supply chain excellence.  Something I struggle with is the peer voting. AMR includes a peer voting to try to capture future potential, but I feel it is, for the most part, a lagging indicator.  While I try to stay abreast of how companies are rethinking their supply chains, I am sure that, for the most part, I only hear of what they have done, rather than what they are doing.  I know this to be true of some of our customers who will not allow us to use their logo in promotional materials because they do not want to make public how they are using their supply chain as a competitive weapon.  I accept that the AMR analysts have a deep and broad knowledge of supply chain initiatives and innovations, but I am not altogether convinced that practitioners do.  However, the peer opinion only accounts for 20% of the score so it may determine which company is No 1, but that company is likely to be in the top 5 anyway because of the other criteria, so this is a fairly minor complaint on my part. What I really like about the manner in which AMR analyzes the supply performance is that they include execution excellence but also innovation excellence in terms of both process and product. So what lessons can we learn from the companies on the AMR Top 25 supply chains list?  In a webinar last week, a replay of which is available on the Gartner website, Kevin O’Marah highlighted a number of tactical initiatives that the Top 25 have undertaken:

Kevin covers each of the tactical initiatives in the replay, but the one that caught my eye was S&OP.  At first I thought Kevin meant this to be one of those “Which one doesn’t fit in the group?” multiple choice tests.  It seems to be a more “operational” initiative whereas many of the others seem to be more “structural,” in other words, how the supply chain and the supply chain organization is structured.  S&OP is more about how an existing supply chain is operated, though one could argue that metrics is more operational too. Even though the survey data used dates from 2009, 63% of respondents are already investing in S&OP and another 15% will invest in S&OP within the next 18 months.  If we look at all the S&OP related initiatives, particularly new product launch, which is 2nd on the list at 68%, there is a lot of S&OP activity in the market. Perhaps not surprisingly, over 51% of companies are using Microsoft Excel, Access, and/or PowerPoint to support the S&OP process, and 35% do not plan to invest in other technology to support S&OP. The primary reason behind this is that there is a lack of belief in the business benefits or ROI.  I find this really confusing in light of the analysis by Oliver Wight below. 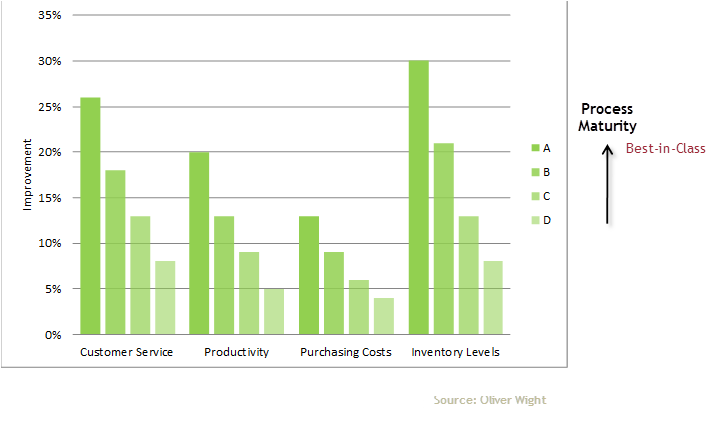 Maybe it is because so many of the companies are doing volume level S&OP only (as I can’t see how it is possible do any level of in-depth analysis at the mix level using Excel) that has led to the low realization of benefits?  Or perhaps it is the lack of “what if” capabilities?  Perhaps this is also related to the Gartner/AMR study that shows that most companies are stuck in stage 2 S&OP maturity?  According the report titled “Conquering the Seven Deadly Challenges of Sales and Operations Planning”, only 18% of companies rate themselves as proficient in S&OP. What the study finds is that in 2007 58% of companies were at stage 1 or 2 of the AMR maturity model.  In 2009 that number has risen to 67% of companies.  (As an aside, I think some of the issue is that people have gained a better understanding over time of what constitutes S&OP proficiency.  I wonder how they would have rated themselves in 2007 given their current understanding of S&OP.) Undoubtedly, one of the biggest benefits of a good S&OP process is greater revenue and cash flow predictability.  Notice that I did not use the term “stability,” but rather “predictability.”  Having a better S&OP process won’t change the markets or the customers' willingness to buy, but it allows the company to better predict what the future financial performance will be.  There are also many hard benefits such as those documented by Oliver Wight.  I just don’t think anyone can achieve the level of process efficiency, and therefore process effectiveness, with Excel and Access in order to realize the benefits identified by Oliver Wight.