Mobile is the future; Apple is the leader.

In November 2009 Morgan Stanley published “The Mobile Internet Report” that outlined the massive uptake of mobile devices over the past few years, particularly Apple’s iPhone. While there is some indication that Android phone activations have caught up to iPhone activations, the market as a whole is growing so quickly that yesterday Apple reported stellar results for the last quarter. According to mobiThinking.com

1.    Mobile subscribers will surpass 5-billion in 2010 (that's over 70 percent of the world population) and growing rapidly, led by China and India.

• What other medium offers that reach?

2.    Half a billion people accessed mobile Internet worldwide in 2009. Usage is expected to double within five years as mobile overtakes the PC as the most popular way to get on the Web.

• But with 277 million mobile Web users just in China, this estimate is sounding a bit conservative 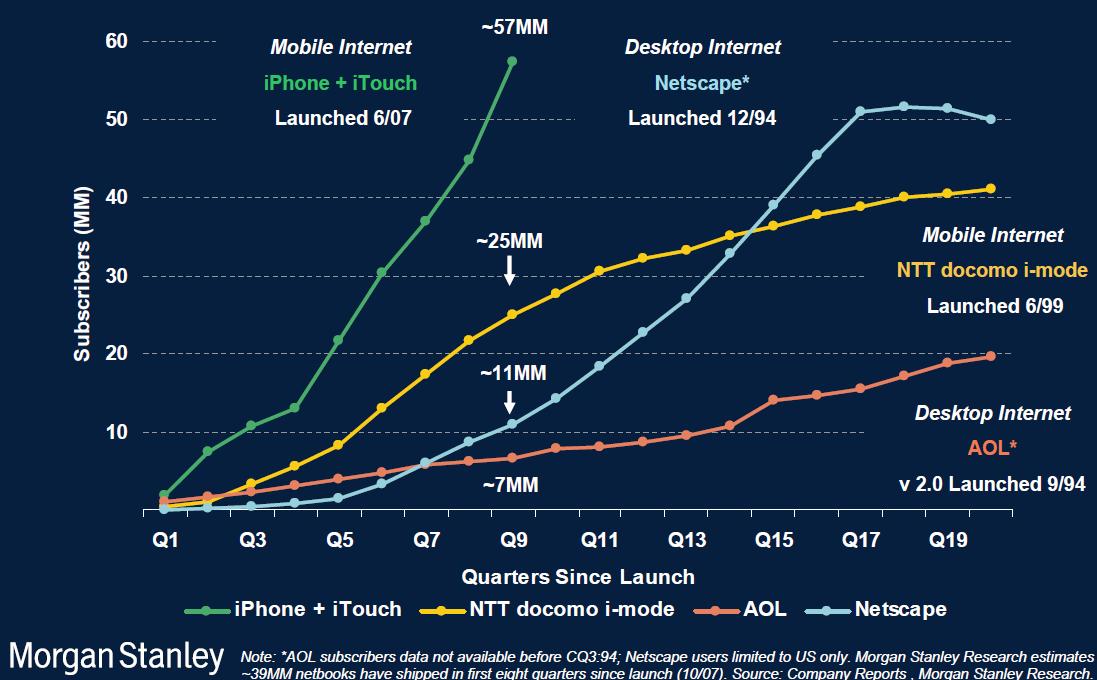 How I wish I had bought some Apple shares as little as 12 months ago. They blew away market estimates in terms of both revenues and earnings with a consequence bump in stock price. With a market cap of approx $320 billion they are the most valuable tech company and one of the most valuable across all industries. Exxon Mobil is the biggest at around $400B.

What’s remarkable about the results is that they could have done even better if they had been able to manufacture more products. CFO Peter Oppenheimer told investment analysts:

“We continue to have a sizable backlog, and believe we could have sold even more iPhones if we had been able to supply them.”

While it’s not clear whether their backlog is due to assembly capacity or component supply, one thing that is abundantly clear is that Apple is in the enviable position of being able to report a backlog. This is very rare in a consumer market and testament to Apple’s brand loyalty. As can be seen in the graph above, the volumes, growth rates, and new product introductions that Apple’s supply chain organization manages were impressive and continue to be impressive. For example iPhone capacity was increased by 2-million units in Q4 for a total volume of 16-million units per quarter. That’s a 14 percent increase in a quarter. At a time when other companies are scrambling to get sufficient capacity and components to maintain existing shipment levels, let alone increase them by 14 percent over a quarter. Given their current backlog, things are about to get tougher for Apple with the iPhone now just becoming available to Verizon’s 93 million customers. COO Tim says

“We do still have a significant backlog. We are working around-the-clock to build more. I feel great that the demand is so high, but at this point, I'm not going to predict when supply and demand will meet. We believe the reaction and results from the Verizon customers will be huge, and so I don't want to give a prediction right now when the supply and demand will cross.”

Apple has been able to ramp production without sacrificing quality. They have top customer satisfaction ratings in their industry, which is a big reason for their brand loyalty. Given their amazing performance it is no surprise that AMR has names them the #1 supply chain for the past 3 years.  I can’t think of anyone that will take the #1 position away from them this year.  I wonder how they do it?