Last month, I launched a new blog series on sales and operations planning (S&OP). In that introductory post, I outlined a number of important topics that I plan to explore throughout the summer. Building upon the last post about foundational elements behind S&OP, I want to consider a question I get all the time from executives: “who really owns, or should own S&OP”? More broadly speaking, it is important to share some leading practices on the organizational aspects of S&OP that includes three components: 1) proper composition of the team, 2) ownership and who leads the team, and 3) how the team performs effectively.

S&OP is a team sport – period. S&OP is arguably one of the most cross-functional processes in an organization and requires input from sales, marketing, finance, supply chain, manufacturing and so on. Some of the best S&OP processes include great cross-functional participation and engagement (the latter being much more critical) from across the organization. When it comes to S&OP, the composition of the team I typically see, in some shape or form, at leading organizations is as follows: 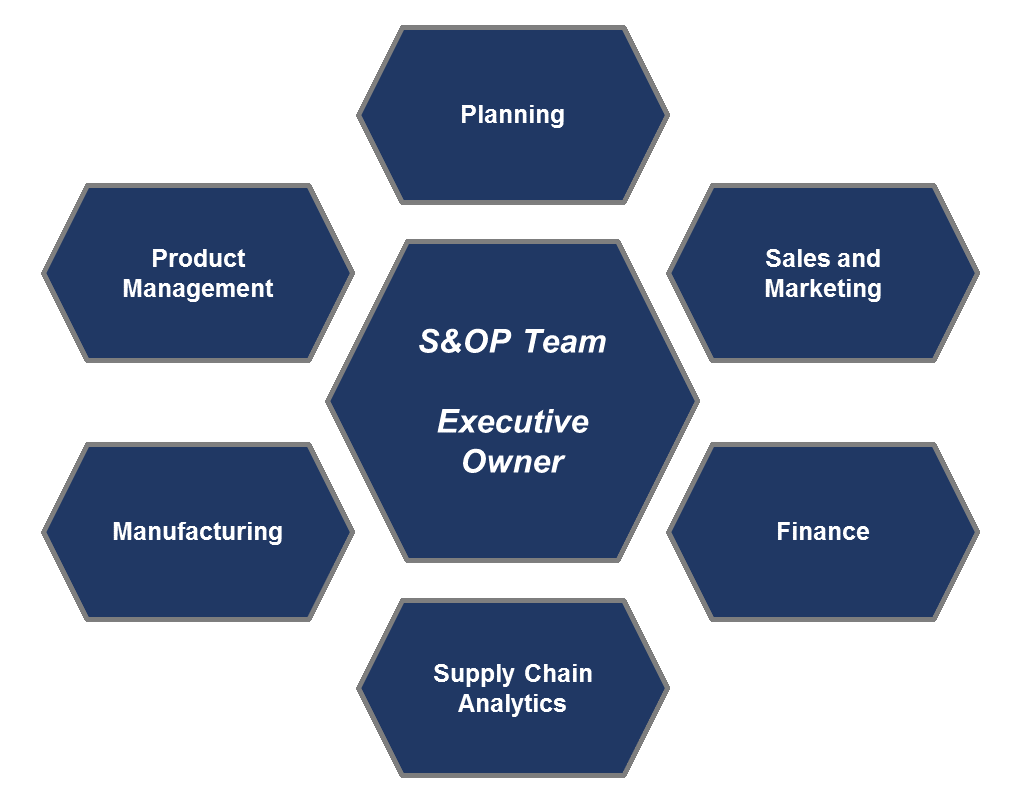 In concept, this team diagram should make sense and be logical to most people, but in practice, oftentimes a number of these functions are either under-represented or missing entirely. Getting the right engagement from the organization requires a few things.

First, leadership from the top-down communicating about the importance of S&OP to the business and its priority to the executive team is critical. Second, when I said S&OP is a team sport, I didn’t mean a spectator sport. A well performing S&OP process requires active involvement and contribution to the team, which means engaging in the process and performing the necessary activities and inputs.

Finally, in exchange for the inputs and active participation in the process, it’s only fair to return the favor and provide valuable outputs to the team members. After all, most of the team members in the diagram above have day jobs to worry about, so to encourage sales or marketing professionals to engage and provide inputs into the process, make sure some of the outputs create value for them. Keep in mind the WIFMs (what’s in it for me) for the team, it will help with the engagement.

The challenge with team-based processes in companies today usually comes down to ownership and alignment of goals and incentives. Oftentimes management’s philosophy is that “the team owns the S&OP process”, which anyone who has spent time working in the corporate world today understands that means nobody owns the process.

To help illustrate the point, let’s step outside of the corporate world for a minute and look at how teams in other settings perform. When I’m not consulting, I like to cook and explore new restaurants around the world. Naturally, the consultant in me drives a curiosity to understand what’s going on behind the scenes in kitchens with the team of individuals preparing my food. The kitchen staff at restaurants is structured around a very distinct hierarchy with a clear chain of command, similar to a military unit. Each person in the kitchen has clearly defined roles and responsibilities, with ownership ultimately falling on the chef de cuisine (or literally ‘chief of the kitchen’).

It is also true in sports, such as football. Every player has a defined position on the field with defined actions or routes to execute for each play. The quarterback serves as the team lead on the field directing and organizing the players based on inputs from the sidelines. The hierarchy extends to the coaching staff through the offensive or defensive coordinators and ultimately to the coach – the one person with overall ownership and accountability for wins and losses. In these two examples, there is a clear chain of command and there is a defined team lead and obvious process owner. When it comes to S&OP, the same assignments are needed – one to lead the process and one to own it.

First, the S&OP process lead (the single person who champions the process – or the quarterback) is typically in planning, specifically supply planning. Planning departments often vary in how they are structured, so sometimes demand planning leads the process. Either way, the head of planning (demand or supply) is what I typically see in high performing S&OP processes.

Second, the owner of the process often depends on the structure of an organization, but I generally see, and recommend a general manager, brand manager, or divisional president / vice president as the owner.  The primary factor that determines the role is driven by the individual with financial performance responsibility – and accountability (similar to the chef de cuisine at a restaurant or the coach of a football team) over the scope of the S&OP process.

Generally speaking, the examples I noted earlier operate effectively – and by effectively, I mean function smoothly with little ambiguity or confusion. Sure, there are breakdowns within these teams from time to time, but compared to a lot of S&OP processes in organizations today, these are high-performing teams.

It’s important to distinguish between an effectively performing team and the skills or talent of the people on the team. It’s worth noting that the skills and talent of a kitchen staff or the players on a football team are certainly important factors that contribute to success, but we will get to that topic in a future post.

For now, stay focused on the effectiveness of the team. What makes these teams operate effectively? It comes down to incentives and goals and how well the team is aligned to those goals.

In organizations today, there are rarely common objectives or aligned incentives among a diverse cross-functional team such as S&OP. As a result, the S&OP team often is burdened with sorting out and navigating these differences.

Think about it – in most organizations today, there are so many performance metrics (by functional area), yet not one is common across the business. And certainly there aren’t aligned incentives or common management metrics tied to compensation plans. Defining common metrics for the S&OP team that each department and functional area are measured on, and held accountable to, helps support the effectiveness of the team.

I trust this post provided some new perspectives on how important the organizational aspects of S&OP are to the process and having the right team and owner. I look forward to reading your comments on this topic and to seeing what other perspectives people have on the S&OP organization. In my next post, I’ll explore how to structure and to consider different operating models for S&OP.

Nice thoughts on running, leading & owning a great S&OP process. I would also like to add HR to above mix of different teams being represented in S&OP meetings. Personally speaking, I have been witness to situations where execution of critical promotions or business expansion plans have faced troubles due to non-existent human resource planning.

I agree with you that Planning team (Demand/Supply) are best fit to lead the process as these teams have access to data and are trained to sift through volumes of data to find out leading connections.

In my personal opinion of running S&OP processes from past 4 years that single most important reason (apart from the discipline of course) for people dropping out of S&OP process is not finding value in the discussion forum. People tend to take S&OP forum as Q&A sessions where somebody mostly SCM) will ask questions and someone (mostly Sales & Marketing) will respond. The concept of "value" may mean many things but in my opinion as long as people are involved in learning more than questioning, a S&OP process will have higher probability of success.

Learning is where the Leader or the owner of S&OP process comes in. If the Leader brings out varied elements involving different teams, it adds depth to the S&OP forum. Moreover given his or her vision on business scenarios or information, he or she should use it to add multiple dimensions to the discussion which just a "Questioning" exercise will not bring out.

Thanks,
Saurabh
Steven J. Puricelli
- July 15, 2016 at 8:02am
Saurabh - thanks for your comments, I agree about the importance of learning and providing value to the team members...and not just for S&OP. All good leaders must strive to do this for their teams.
Joseph Roy
- July 16, 2016 at 3:21pm
Hello Steven,

Interesting article. I like the team process approach and would encourage more dialogue around timeframes for data assimilation and review, and the final publication of a plan or forecast. Do all team members have a vested interest in the output, and what does the output look like? We know that technology drives the "consumer chain" and that the supply side is driven by rapid response strategies. I'd like to know more of your thinking on how the S&OP process enables manufacturing to respond quickly to (1) consumer demand changes, (2) competitive activity in the marketplace which might impact the S&OP plan, or (3) merchandise short term strategy changes because of sales shortfalls.
Thanks
Joe