Supply chain excellence is not a guarantee for success

My colleague John Westerveld wrote a blog recently titled “The mobile revolution hits the supply chain” in which he explores the impact of mobility, and tablets in particular, on the supply chain.  This led me to think about the fortunes of the companies that provide mobility, particularly the hardware providers.  But then Apple has changed the whole concept of hardware and software so radically over the past few years that it is difficult to separate out the hardware from the applications.  Of course Microsoft did this 20 years ago with Windows, but they didn’t own the hardware. More importantly though, I want to explore the difference between product design and supply chain because many of the mobility providers have had a rocky ride over the past 3-4 years, and yet many of them have excellent supply chains, and have been recognized by Gartner in the Gartner/AMR Supply Chain Top 25 over the past years for this excellence.  I have compared the list from 2008 to 2011 to highlight the fortunes of the mobility companies, which are highlighted in red below.  (I’ve excluded Microsoft from the list of mobility providers because of the failure of the Windows phone and because mobility represents such a small portion of their revenue. I’ve included Samsung simply because of the success they are having lately with their Android phone and tablet, but in reality Samsung has a much broader product portfolio than Apple, Nokia, or RIM, making a direct comparison difficult.) 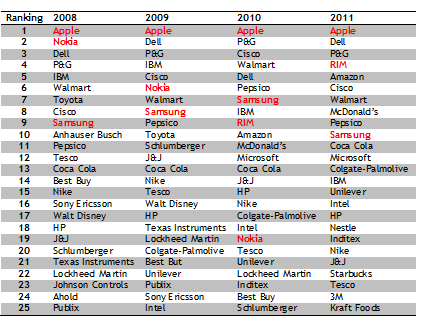 Of course, many people, including me, have criticized the Gartner/AMR Top 25, but it is a consistent methodology that emphasizes both supply chain effectiveness and product innovation. It is in this regard that I want to comment particularly on Nokia and RIM. But the stock market is really the comparison that matters.   According to Google Finance, in the period since Jan 2005 the Dow Jones is up 17%, Apple is up 1213%, Nokia is down 67%, and RIM is down 56%. How I wish I had invested in Apple, even as late as in 2008. 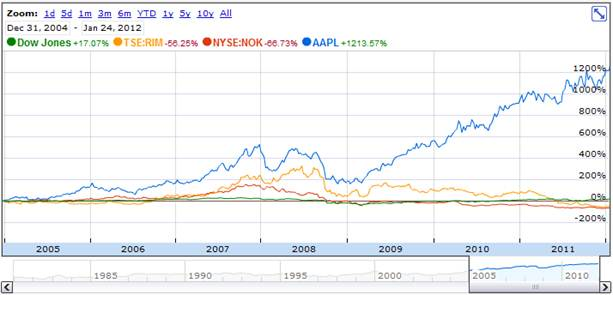 While Apple has been the consistent winner of the Gartner/AMR TOP 25 for the past 4 years, Nokia placed 2nd in 2008, 6th in 2009, 19th in 2010, and dropped off the list in 2011, even though from a stock price perspective Apple was out performing Nokia even in 2008.  Likewise, RIM wasn’t even ranked in 2008 and 2009, leaped into 9th place in 2010, and up to 4th in 2011, even as their stock price was taking a beating.  So Nokia and RIM were doing something right in their supply chain if they could be ranked as highly by Gartner in a comparison that includes product innovation.  And they were, both companies showing a lot of innovation in their supply chains.

If we look at the 2 graphs below we can see why Apple is the clear supply chain leader with much better performance over the past 3 years in measures such as RONA, inventory turns, and DPO/DSO ratio. But Nokia’s and RIM’s performance are very good with inventory turns greater than 15.  Even Nokia’s RONA is very good despite their relatively poor performance against Apple and RIM, which can be explained by the fact that Nokia’s manufacturing is mostly insourced while Apple and RIM have almost 100% outsourced manufacturing. But it is in Cash-to-Cash (C2C) that we can see the real dominance of Apple in terms of supply chain efficiency and effectiveness. They have reduced their C2C from -20 days in 2005 to an astounding -60 days in 2011. At their current cost of goods sold of $25.63B per quarter, the C2C improvement represents an additional $11B of cash released on an annual basis. Assuming a WACC of 10%, that represents a savings of $1B, which can fund an awful lot of product research or marketing. Apple notwithstanding, because it is really an outlier, RIM and Nokia have posed very good supply chain performance numbers that, when compared with other companies, fully justify their ranking in the Garter/AMR Supply Chain Top 25. 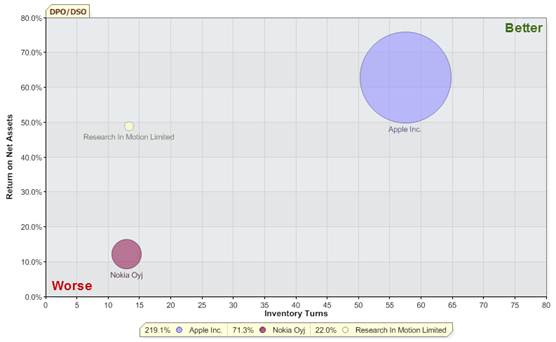 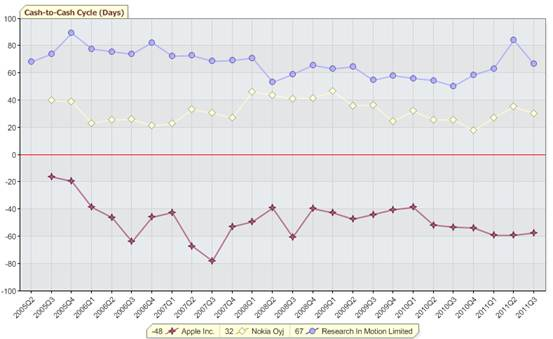 It is when we look at Nokia’s and RIM’s gross margin and operating margin that we can see the net effect of their strained product portfolios.  In a 6 year period Apple has achieved a 10 % improvement in gross margin and a 15% improvement in operating margin, compared with  -15% and -25% for RIM, and -5% and -15% for Nokia. But I’ve got say that I still find the Blackberry more functional from a business use perspective and the Nokia a lot more intuitive from a novice user perspective, although these are the exact product characteristics that are hampering their growth. 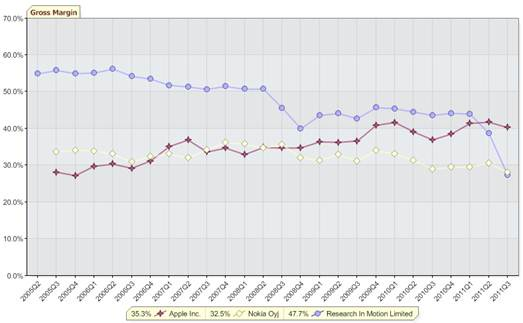 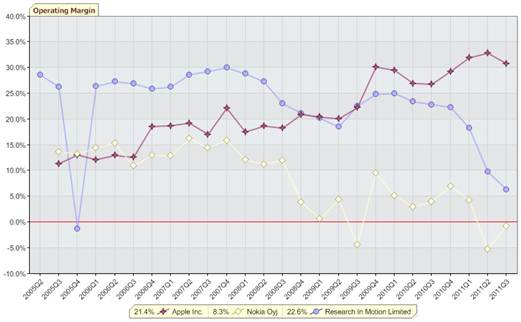 I really hope that both Nokia and RIM manage to survive their current reversals in fortune because they are great companies with very efficient supply chains. They have fully justified their prominence in the Gartner/AMR Supply Chain Top 25.