The semiconductor industry has experienced rapid growth over the past few decades driven by leaps in innovation. To meet demand for specialized application devices, US based semiconductor firms realized they needed to become more agile and focus more resources on product development, which was their key point of differentiation. The innovations in chip design and the ever shorter product life cycles were making manufacturing ever more complex, which the semiconductor companies recognized was not their key differentiator. Having started outsourcing wafer fabrication in the 1960’s, by the early 1990’s most semiconductor companies had outsourced the bulk of their production to third-party foundries, which allowed fabless semiconductor firms to focus their resources on creating new, industry-changing products. As can be expected, semiconductor chips are critical components in consumer electronics products from desktops, to laptops, to smartphones, to tablets, to e-readers, to cameras, and the convergence of all of these into hot new gadgets such as the iPad.  Given the success of smartphones, the iPad, Amazon’s Kindle (est 8-million units sold and currently out of stock worldwide), electronics is one of the few bright spots in the economy where consumers will gladly dish out large sums of money on a device that has less than a two year lifespan. Nothing captures the explosion of the devices required in consumer electronics better than the massive Morgan Stanley report titled “The Mobile Internet Report”, which, because it was published in 2009, doesn’t even capture the explosion of the iPad. 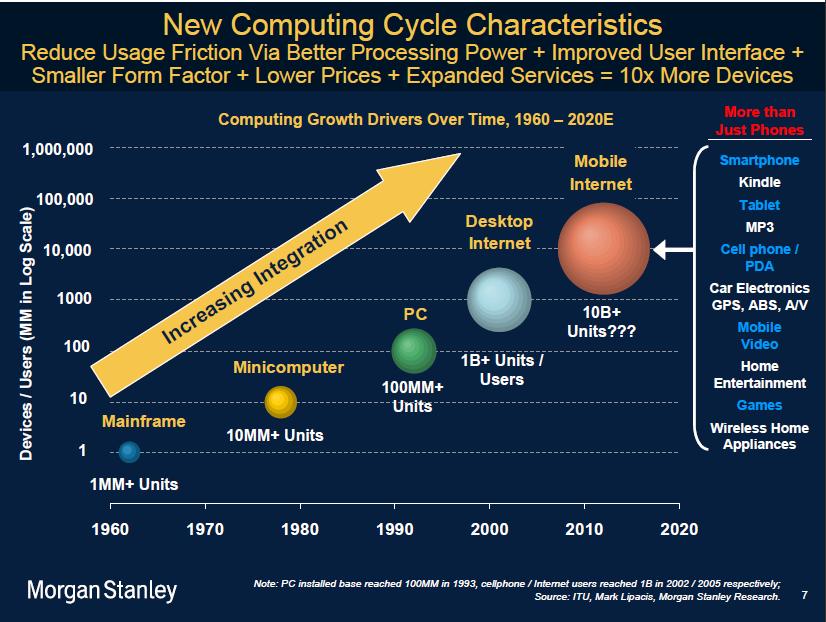 In addition, an increasing number of traditional products are going high tech like cars, washing machines, dishwashers, refrigerators, etc.  In many cases, the primary differentiation between dishwasher models from the same manufacturer is no longer the physical mechanics but rather the control chips that add different cycles and options. While there has been an explosion in the number of chips required to serve the increasing digitalization of products, there has also been a massive increase in custom chips required for specific purposes, as well a huge pressure to reduce the product life cycles.  It is this pressure to innovate that has driven many semiconductor brand names to focus on design, marketing, and sales, and to outsource manufacturing.  However, semiconductors are in the middle of a very long and complex value chain – one that is not very responsive to demand swings because of long manufacturing lead time, high capital costs and time to increase fab capacity and numerous supplier relationships throughout the different stages ―from wafer production to fulfillment.  Building a new foundry typically requires about $4-billion and takes two years from ‘first shovel’ to ‘first wafer’.  Given the rapid development of new wafer manufacturing technologies that improve the power consumption to speed ratio as well as ever smaller circuitry and ever larger wafers, fabless semiconductor companies are increasingly dependent on a few large foundries. Fabless semiconductor companies that can be responsive to customers while remaining cost efficient will gain an advantage over their competition. At our recent user conference, Mark Utter, Sr Dir for Qualcomm, spoke about how Qualcomm has been able to achieve a 98 percent on time delivery rate and an 85 percent order flexibility rate (i.e. being able to fill an order on the customer’s initial requested date). Qualcomm has been able to perform at this level with only four days of on-hand inventory, which is extremely impressive given the increasing demand volatility and long lead times from the foundries.  How does Qualcomm do it?  They work hard at creating a fast, reliable, flexible, scalable and cost effective supply chain through investment in better manufacturing process (postponement strategy), close collaborative relationships with suppliers and customers, excellent visibility to their entire supply chain and solid processes that allow them to be proactive and respond quickly when something unexpected arises, either in the long-term or in the short-term. Click here to watch a video from Qualcomm's presentation at Kinexions ’10.