Systems supporting key business processes are too cumbersome to support the rate of change in today's companies.

Virtual Strategy Magazine recently reported, http://www.virtual-strategy.com/2011/05/10/supply-chain-issues-are-top-risk-us-tech-industry-according-bdo-study, on a BDO study, http://www.bdo.com/download/1371, about the risk factors most frequently cited in the 10K reports of the 100 largest publicly traded US technology companies.  The table below is a summary of those results. 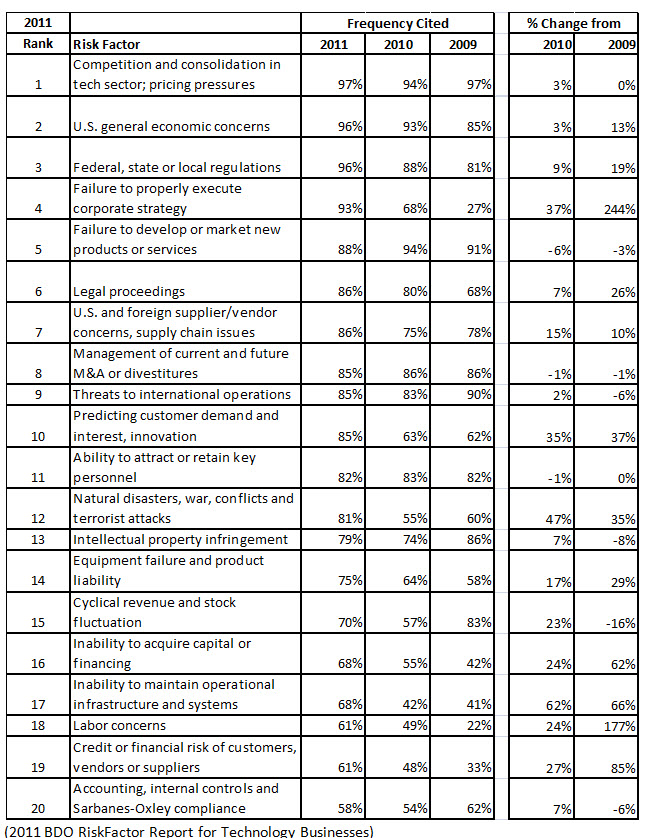 On its own, the list is quite interesting.  As noted in the article, the 10-K filings were made before the Japanese tsunami.  I would expect that more recent filings would include Supplier/ vendor concerns (#7) and Natural disasters (#12) which would elevate the ratings for these risks. I also find it interesting to study the risk factors that have gained prominence in the last year.  The table below shows the top five risks ranked by percentage change between 2011 and 2010.

The fastest growing concern is “Inability to maintain operational infrastructure and systems.” Perhaps this is an indication that executives are concerned that they have too many systems and that the systems they have are too complex or too difficult to integrate. Clearly, the prevalence of world conflicts and natural disasters, coupled with global markets and suppliers, explains the rise of “Natural disasters, war, conflicts and terrorist attacks.” As mentioned above, I would expect this category to be cited even more frequently in 2011/2012 reports. I find the rise in “Failure to properly execute corporate strategy” fascinating.  From being mentioned in 27 percent of 10-K filings in 2009, it has jumped to being cited in 93 percent of 2011 filings. I wonder what impediments are worrying executives. It has always been difficult to “Predict customer demand and interest, innovation.”  However, this risk factor is also growing as a concern for executives. Finally the rise in, “Credit or financial risk of customers, vendors or suppliers” tells me that executives are either dealing with riskier business partners or that the general economic situations is putting more companies at risk. What is not discussed in the Virtual Strategy article is what companies can do to mitigate the impact of these risks. I think there is actually a common, underlying theme to these five fastest-growing risks:

Systems supporting key business processes are too complex and too cumbersome to support the rate of change in today’s technology companies.

There is a clear an obvious link between my above statement and the fastest rising risk factor. To my mind, the remaining four rising risks are all related to managing the business despite rapid, uncontrollable change. Current business processes, and the systems supporting them, frequently take a month or more to detect a business-altering change and to change course to adapt to that change (whether the change is seen as a problem, an opportunity, or both). I suggest that new processes and response management strategy are required so that the time to detect and react to change can be shrunk to days, even hours. For example, following the Japanese tsunami, I have heard anecdotes about some companies launching response teams and securing alternative sources within hours of the disaster. On the other hand, I have also heard of companies, months later, which are still figuring out the parts that are likely to be in short supply and how to select alternative suppliers. Clearly, the latter will have much more difficulty maintaining production in the face of global supply shortages. What do you think?  Does your company need systems and processes which are simpler to use, more flexible, and more responsive? Do you know of examples where fast, responsive, flexible systems gave you a competitive advantage, or where their absence resulted in serious losses?