The Shifting Sands of World Economies

It is amazing to me that there are many in the West that continue to hope—dare I say, pray—that the shift in the world economies over the past 5-10 years is an aberration, and soon we will be back to the heady days 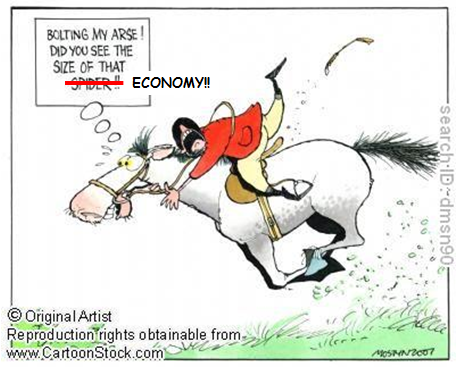 of the mid-2000s. Every day I read stories about how manufacturing is going to return to North America. Sure some if it will, but we are trying to close the stable door after the horse has bolted. For one thing, the global economy has changed, and people are simply not interested in some of the products we produced “back then.” Even if wages in China and India double, it will only mean that products are more expensive in the West, not that it will be cheaper to produce in the West. I know this sounds harsh and uncaring, especially stated from my ivory tower position in a software company that is doing very well, thank you. I don’t mean to be harsh, but I am impatient because we are trying to fix the wrong problem. And I admit that it is easier to point out problems than it is to devise solutions, but without an agreement on the problem at hand, there is little opportunity to reach consensus on the manner in which to resolve the issue. I wish I had a crystal ball that would tell me how to turn things around, but I don’t. But I know it isn’t by sitting around hoping for the world to right itself. The horse has bolted, and closing the stable door isn’t going to keep it in. Here’s why. In June 2009 I wrote a blog titled “Recession or Reset?” in which I quoted the following passage from a Forbes.com article:

The real question: Can China pump up domestic demand soon enough? Chinese private consumption’s share of GDP fell steadily over the last decade to around 35%, meaning it may have a long way to go to pick up the slack of the export sector and export-oriented investment.

While this is still a real risk, there is other evidence that China is emerging as a major consumer market, such as the ZDNet report “China on track to be top smartphone market in 2012, says IDC.”

Commenting on “Rising Chinese Wages a Headache for U.S. Firms” in Industry Week, Andrew Beatty of Agence France-Presse states that:

Last week, Nike reported it had made even more profit than it did the quarter before, yet its stock sank. Investors hacked about $1 billion off the company's value on March 23 because of a reference to "declining gross margin" stashed in the firm's quarterly report. The details are complicated, but Nike's jargon in part referred to rising wages in places like China taking a chunk out of profits. Indeed, the details show rising wages—along with some other factors like higher material costs—caused Nike's margins to fall two percent in just one year.

Andrew goes on to state:

That leaves U.S. manufacturers with only a handful of options: accept lower profits, pass the cost on to consumers or lower labor costs some other way.

But that is a very U.S.-focused perspective.  What does this look like from China? Commenting in The China Daily in 2004, Xin Zhigang says that:

The Chinese Academy of Social Sciences (CASS) released a report earlier this year that suggested China's "middle class" accounted for 19 per cent of the country's 1.3 billion population by 2003. Based on an annual growth of one percentage point, the "middle class" people in China is expected to make up for 40 per cent of the total population in 2020, the academy report said. 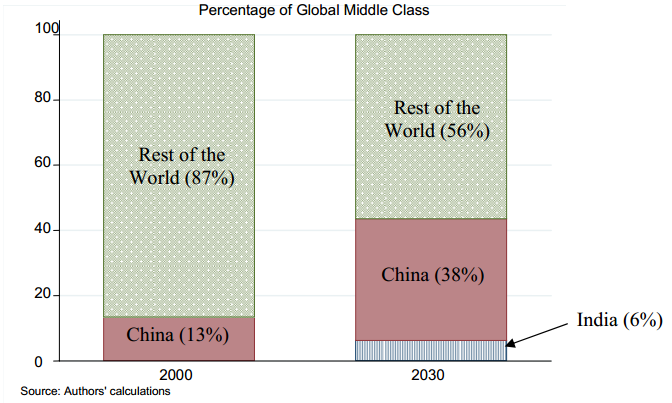 The issue for the West has shifted from how much can we buy from China, to how much can we sell to China. That’s my opinion anyway. We’ve got to shift our focus from outsourcing to marketing and sales. How are we going to capture as much of the Chinese market as possible? That is the question that should beat the top of every Western CEO’s mind. But we need to get on our bikes. Now. Much of the comment in the West is about how, as wages rise in China, manufacturing will move to Vietnam, amongst others. In an article titled “Selling to China & India’s Middle Class – It’s a Vietnam Manufacturing Play” Chris Devon-Ellis of Dezan Shira & Associates makes the observation that:

While rising labor costs may make many grumble in China about the costs of staff, another benefit occurs. That increasingly wealthy and prosperous worker can now afford to buy more goods.   Vietnam, then, is starting to stand up as an important regional player when it comes to servicing markets in Asia, especially so for those wishing to take advantage of new opportunities in selling to the growing Chinese and Indian middle class markets. The role of ASEAN, and the free trade and double tax agreements it holds with China, India and other nations now need to be evaluated as the global race to sell to Asia begins in earnest. Establishing a manufacturing operation in Vietnam may well be a strategy that will hold up well in order to consecutively sell to China and India–and ASEAN.

In other words, even as Western companies try to satisfy the markets in China and India, it is unlikely that manufacturing will return to the West. So let’s move on. I will leave larger social policy discussion to others that are much better informed and knowledgeable in this area. But from a supply chain perspective, the discussion has to move from “how do we get goods to the West from China” to “how do we design, market, and manufacture goods to satisfy demand in China and India?” Anything else is a race to the bottom.

Matt
- March 29, 2012 at 4:17pm
The research and commentary in this article tends to concur with the trends I'm seeing as well. I come from an online world as you do, and it seems that the old manufacturing-line mentality of work will not be returning to it's former American glory.

Peopl want the stability and predictability of work the way our fathers and grandfathers made it, but that's unlikely to happen.
Trevor Miles
- March 31, 2012 at 5:51am
Thanks Matt