I think everyone within the supply chain space is well aware of the resurgence of interest in Sales & Operations Planning (S&OP) over the last 5 years, particularly in the last 2 years.  The question is what has caused this to happen?  I believe the root cause to be demand uncertainty and the consequent need for risk mitigation across the supply chain. Several analysts, including Lora Cecere, are of the opinion that the very steep recession and subsequent rebound are behind the renewed interest.  Lora writes that because of the recession

All that is known is the unknown.  As 2010 winds to a close, three things are certain for supply chain professionals: - The links of the supply chain are weaker - Demand is more uncertain - Supply is more volatile

Nari Viswanathan at Aberdeen wrote a survey report in 2009 titled “S&OP: Integrate with Finance and Improve Revenue” in which he states

... it has intensified because of the global economic recession that began unfolding a few months ago.  Sales and Operation Planning (S&OP) is the key integrated process that the supply chain organization (specifically the VP of Supply Chain) can leverage to achieve visibility and transformation across the entire organization and the value chain.

I wrote a blog recently which, in retrospect, I realise I titled incorrectly. Originally titled “What’s behind the renewed interest in S&OP planning?”, I should have really titled it “What’s reducing the barriers to adoption of S&OP?”  Though I picked up on the focus on the recession by the analysts, I did not dig deep enough into the business reasons for the renewed interest in S&OP.  It goes deeper than the recession, although I agree that the recession has exacerbated some underlying issues, the most important of which is demand uncertainty.  What about supply uncertainty?  In an article in SupplyChainBrain titled “Multi-Echelon Supply Chains: Multi-Inventory, Multi-Problems” Jean Murphy wrote in February 2007 that

... Cisco places its products on a 2 x 2 matrix, with supply uncertainty on one axis and demand uncertainty on the other, each moving from low to high. “Our products fall all over the place,” [Karl] Braitberg says. “We have lots of product where we have very good demand certainty, but we still have to look at other variables and make sure we understand how reliable the supply chain is in total.

The reason for me choosing this quote is that it was made over 3 years ago, at a time when we all thought increased prosperity was a given.  In February 2007 we were not planning for the recession, yet Karl Braitberg makes a very clear case for two of the themes identified by Lora: demand uncertainty and supply volatility. I think we have to look no further than the “long tail” to discover much of the cause of demand volatility.  Product proliferation, which is a direct result of the “long tail” phenomenon, in turn leads to frequent new product introductions with short periods of margin capture. However, as pointed out by Karl Braitberg in the quote above, not all products are created equal.  Not all supply chains are created equal, and not all industries are created equal.  In the diagram below I try to capture some of the causes of volatility by industry segment, namely demand volume and product life span, both of which are a consequence of the “long tail”. 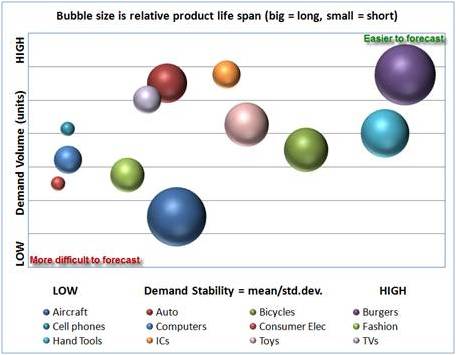 Clearly the industries on the left side of the chart have greater demand volatility (or lower demand stability).  Notice also for the most part that these same companies have shorter product life cycles and smaller unit sales, both of which contribute further to the difficulty of creating an accurate demand.  It is in these segments where we are seeing a big increase in S&OP interest. I was struck by Lora’s use of both “uncertain” and “volatile”, rather than either uncertain for both demand or supply, or volatile.  I not sure if this was a conscious choice. I have always considered these to be separate but similar concepts, so I thought it best to investigate the difference.  The descriptions I found on the web are as follows: vola•tile (väl′ə təl; chiefly Brit, -tīl′) adjective 1. vaporizing or evaporating quickly, as alcohol 2. a) likely to shift quickly and unpredictably; unstable; explosive: a volatile social condition b) moving capriciously from one idea, interest, etc. to another; fickle c) not lasting long; fleeting un•cer•tain (un sʉrt′'n) adjective 1. a) not surely or certainly known; questionable; problematic b) not sure or certain in knowledge; doubtful 2. not definite or determined; vague 3. liable to vary or change; not dependable or reliable 4. not steady or constant; varying 5. Statistics The estimated amount or percentage by which an observed or calculated value may differ from the true value. While related these terms are different.  I would argue that volatility is one of the causes, perhaps the primary cause but not the only cause, of uncertainty.  Volatility is what we experience; uncertainty is what we feel about future events based upon our experience of volatility.  Simplistically, volatility is about orders; uncertainty is about the forecast.  What interests me is the order in which Lora used the terms.  I would have used “volatile demand” and “uncertain supply”.  I come from industries in which demand has always been uncertain.  What has changed is that demand has become more volatile. Perhaps Lora’s point is that increased demand volatility had led to increased uncertainty. Recently, in separate conversations with two mobile phone handset manufacturers, we heard that they have made concerted efforts over the past few years to improve forecast accuracy.  Despite these efforts, in one case their forecast accuracy is a little over 40% whereas in the other case they have never been able to achieve more than 50% accuracy.  One can argue that they are doing a poor job at forecasting.  No, they are not.  These companies have been recognized as leaders in supply chain management.  Demand volatility, and consequent demand uncertainty, is a characteristic of their market. I wrote a blog a number of months ago titled “I am adamant that an accurate forecast does not reduce demand volatility” in which I refer to volatility is the primary cause of low forecast accuracy.  There was a storm of protest on the Institute of Business Forecasting & Planning LinkedIn group (membership required), mostly from people in a forecasting function in consumer packaged goods companies. Note from the diagram above that CPG companies tend to be in the top right corner of the diagram above, meaning they have more predictable demand. The key point I was making is that demand has indeed become more volatile.  With clever maths and models we may be able to reduce the uncertainty of demand in the sense that our forecast accuracy has improved, but does not reduce the demand volatility, which is still a problem because of the knock on effect on the supply side.  As Lora Cecere points out, outsourcing and off-shoring have increased the supply uncertainty.  The supply uncertainty is further exacerbated by the demand volatility. I believe that demand volatility is having an impact on our ability to forecast demand and with decreasing forecast accuracy comes increased demand uncertainty.  It is this demand uncertainty that is key to driving the increased interest in S&OP.  With increased demand uncertainty comes increased risk of not meeting market expectations, of increased excess and obsolete inventories, of reduced margins, etc.  While demand uncertainty is the driver for the increased interest in S&OP, risk mitigation is the goal.

Jon Kirkegaard DCRA Inc.
- July 27, 2010 at 8:44pm
In reply to your S&OP story with quotes from key analysts all I can say is never underestimate the lack of awareness in the 90% of companies in the middle of the statistical Bell curve.

In reality almost every top 1% of firms by industry execute S&OP much better then their competitors and it shows in their working capital and cashflow performance. Coach in apparel, Dell and Apple in personal computers, Siemens, Cisco in telecom equipment, Wal-Mart who pushes the reality and responsibility to their suppliers, JC Penny for their 60% of goods they now "manufacturer"... yes manufacturer using contract manufacturers etc.

For the rest of the 90% what is needed are approaches the build the awareness of how impactful any attempt to better net REAL demand and supply is to business performance. In our experience they will not engage unless they are shown how and the tools are phenonmenally easy to use (like Google). Others will engage often when it is to late when a firm is on their back like a turtle trying to compete in a 100 yard dash.... by then it is often to late... but they get it :) Just not the best way to grow business and jobs in a global world

For free access to a non profit S&OP awareness knowledgebase visit www.Texaslcc.org. Filled with article, stories, analytics, techniques and approaches to build awareness by the role (job) of the person you are trying to engage