It should come as no surprise that SCM World recently published findings (from the November 2012 report Apple and Amazon: Lessons for the Rest of Us) that Amazon beat out Apple in a survey of top Supply Chain executives polled on which had the best supply chain.  But it is a little like comparing apples and oranges.  They are both fruits, and they are both round. That much is true.

Allow me a little digression while I share some of what I learned in doing some background research for this blog. 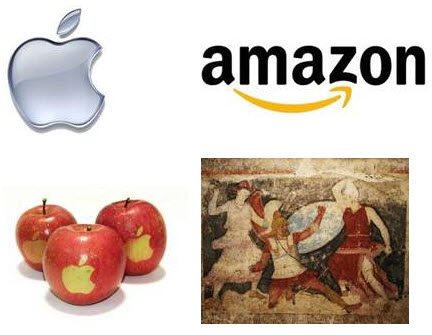 I don’t know about the rest of you, but for me the logo concept comparison is not even close, Amazon wins it hands down, even though the Apple logo is easier to recognize.  I have to say I was absolutely amazed at how difficult it was to find a PG-13 concept image for Amazon.  In case there are some who object to even this image, I pulled it off of a web site called A Celebration of Women. I grew up with the Amazon story from Greek mythology, and was far less acquainted with the whole comic sub-culture surrounding Amazons. To me, the image that is conjured up is much more Hillary Clinton – smart, capable, hard-working - than some half naked woman wielding a sword.  Must be the nerd in me coming out. Some of you are probably wondering what the heck I am on about, but the discussion about Amazons isn’t as crazy as it seems, because, according to Wikipedia,

Bezos wanted a name for his company that began with "A" so that it would appear early in alphabetic order. He began looking through the dictionary and settled on "Amazon" because it was a place that was "exotic and different"

Wow, the power of search engine optimization was alive and well even in July 1994. The Amazon river was called this because the first Europeans to navigate the river were attacked by female warriors.  You can even imagine the swoosh under the Amazon name representing the river flowing from A to Z, but supposedly this is much more prosaic: It indicates that you could order any books from A to Z.  I always thought it was a smile, perhaps of an Amazon after a victory of some sorts. Similarly, for all that Steve Jobs is hailed as a marketing genius, according to an Apple manual, it seems that there was little science applied to the selection of the company’s name.

The name Apple Computer was chosen late one afternoon as Steve Jobs and Steve Wozniak, Apple's founders, faced the deadline for filing a Fictitious Name Statement, part of the business licensing procedures. After volleying names back and forth with Wozniak for hours, Jobs looked at the apple he was eating and decided that, unless he or Woz arrived at something better by five o'clock, they would call the company Apple. Five o'clock came and went; Apple was the new company's name.

The more serious point about the title of my blog is that Apple is (principally) a manufacturer and Amazon is (principally) a retailer.  At first glance it is difficult to make a direct comparison on anything other than the most superficial level. Kevin O’Marah, Head of Faculty at SCM World and co-author of the report, points out that the companies are competing furiously for the tablet market, with the Kindle from Amazon and the iPad from Apple. Both of course have a broader portfolio than tablets and Apple still has a commanding lead in this space.  The IDC numbers don’t even mention the Kindle in their market analysis, although I presume that the Kindle is included in the Android numbers. I understand the battle between the companies from a digital content perspective, but I am less sure that there is a way to compare their supply chain performance directly.  Kevin has been writing about the ‘digital supply chain’ for some years now, with the last AMR Research annual conference he hosted being focused on the digital supply chain.  Perhaps I am too much a ‘meat and potatoes’ kind of guy, but a supply chain is something physical to me. You can see the things in a supply chain.  A telephone call isn’t a ‘digital supply chain’, nor is a FAX, nor is the download of a book onto a tablet.  I realize the latter has disrupted (disintermediated?) the business model behind a physical supply chain, but is this enough to call it a supply chain? Don’t get me wrong, I am fascinated with the business model surrounding digital content.  This is the biggest shift I am going to see in my lifetime, and it is having a profound impacts on how people learn, the structure of universities, and so much more.  And when I look at Amazon and Apple, it is a sobering thought that perhaps I am in a sector – the physical supply chain - with less and less relevance.  When I think about the fact that the difference between various models of dishwasher comes down to software rather than mechanics I know that there has been a profound change to the mechanical world in which I grew up. So perhaps Kevin is correct and I am a dinosaur. But let us stick with these two companies for now.  It is difficult to get hard numbers, but it seems that the physical Kindle accounts for somewhere between 10-15% of Amazon’s revenue.  But what is staggering is that they are selling more digital content than physical books in the UK.  According to Bloomberg, Amazon still spends huge amounts on physical infrastructure, about $4.6 billion on warehouses in 2011, and has built 13 more distribution centers in 2012. My take is that Amazon isn’t getting out of the physical supply chain business any time soon (especially after they bought Kiva Systems in March 2012) regardless of the pickup of their digital business. And this is where they are showing real leadership.  My take is that this is also what the respondents of the SCM World survey were referring to when they ranked Amazon better than Apple, but, since I don’t have the data and did not talk to the respondents I can only presume this to be the case. According to SCM World,

[Amazon] also came out top on three of the four supply chain attributes that survey participants were asked to rate the two companies on: agility, collaboration and execution.

I consolidated the results of the survey as follows: 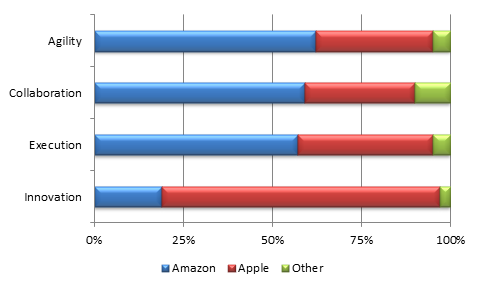 Unfortunately, Innovation wasn’t defined. I suspect that in Apple’s case it is more about product innovation, probably also business model innovation, rather than process innovation.  While undoubtedly Apple is very good at supply chain, it is their product innovation that really stands out, and what pulls them into the first spot in the Gartner Top 25 list. I have to admit that I know more about Amazon’s supply chain than I do about Apple’s, so I may be completely wrong. Let’s look at where Amazon excels – Agility, Collaboration, Execution. While we need to decompose capabilities in order to best analyze and describe them, my understanding is that Amazon’s strength is in bringing all three capabilities together in an operating model.  They are able to achieve their execution excellence because they collaborate across the supply chain is order to be agile. In other words, the merging or blurring of planning and execution. While I have written quite a lot about agility and collaboration, I see the next phase of supply chain innovation coming from how Amazon is blurring the distinction between planning and execution, what Gartner has started calling Integrated Business Operations. Many of you have probably been wondering what the graphic down the right hand side has to do with this blog.  Well, a lot. In order to blur the distinctions between planning and execution we need a lot of data quickly.  As I have commented before, data is the new oil, powering everything digital, especially the digitized supply chain. While much has been written about the impact of social media on Marketing and, to some extent, Supply Chain, it is the ‘Internet of Things’ which is going to have the largest impact on the supply chain and truly blur the lines between planning and execution.  We need Social because of the data latency in our systems, and therefore our decision processes.  We also need the current formulation of Predictive Analytics – prediction of near term behavior based upon the recent past – because of data latency.  Social tells us about the ‘sentiments’ surrounding our products which we then use to extrapolate to future market share and revenue. While I see the value of Social for Marketing, it is the Internet of Things that is going to have the more profound effect on the supply chain, including Demand Planning, even though there is a natural linkage between social and Demand Planning.  Our primary objective of collecting Point-of-Sale (POS) data was to know true demand sooner and to then adjust our supply chain to meet true demand.  All the elements of the Internet of Things is captured in that description of POS.  As is the blurring of planning and execution through a rapid and persistent feedback loop between planning and execution.  And this is where Amazon excels. IBM’s whole Smarter Planet initiative is geared toward the Internet of Things, which they describe as having 3 basic characteristics: Instrumented. Intelligent. Interconnected. In an article titled “The Internet of Things” and dating all the way back to 2010, McKinsey comments that … the predictable pathways of information are changing: the physical world itself is becoming a type of information system. … sensors and actuators embedded in physical objects … churn out huge volumes of data that flow to computers for analysis. When objects can both sense the environment and communicate, they become tools for understanding complexity and responding to it swiftly. All of these initiatives are focused on two outcomes, which are where Amazon excel:

Andreas Wieland
- December 17, 2012 at 5:48am
Apple and Amazon pursue, indeed, very different supply chain strategies. Apple has chosen marketing and R&D to be its core competencies, but Apple has outsourced manufacturing. Amazon has become "the" e-commerce star. These very different business models make it almost impossible to compare the supply chains at all.
Trevor Miles
- December 18, 2012 at 9:44am
I agree Andreas. But I do find that the distinctions are blurring. According to some analysis (http://www.appolicious.com/articles/11792-apples-itunes-app-store-surpasses-600k-apps-1-9-billion-in-revenue-for-q2)

"Apple also revealed that iTunes itself dragged in some $1.9 billion in revenue in just the second quarter of 2012. The store sells apps for iOS, as well as music, movies, podcasts and e-books, all of which contributed to the giant take. Apple receives a 30 percent cut of revenue generated by content sold through iTunes, which means that app developers and content makers shared some $1.33 billion in revenue from the digital portal. The leftover $570 million, Apple said, went to iTunes operational costs. Apple also said developers have made more than $4 billion from the App Store since it was launched in 2008."

If we contrast that with the fact that Amazon draws more revenue from digital content than physical books in the UK, and that the Kindle represents a substantial proportion of Amazon's sales (10-15%), the manufacturing of which is outsourced, and that Amazon doesn't actually manufacture anything they sell (which is the equivalent of outsourcing), the differences do begin to blur from a physical supply chain perspective.

Their business models are indeed very different with, as you point out, Apple being fa more focused on R&D and Marketing. Actually that should be Marketing and R&D. ;-)