I like to think of myself as a champion for women in all walks of life. And in terms of the supply chain, I believe there are female characteristics that we can and should leverage a lot more, specifically their more collaborative and consensual approach to solving problems. Of course I understand that these are generalizations. Prejudice is devaluing characteristics particular to one group, and assuming that a particular member of a group conforms to the broad generalizations about that group. I hope I do neither.

Why do I write about this topic now? Well, it is International Women’s Day for one, but it is also a topic I have written about before when commenting on the HSBC ‘Thank Heaven for Little Girls’ campaign and on a panel about women in supply chain at a John Gattorna conference in Singapore. Here are some links to other resources for International Women’s Day:
If we understood and valued more the right skills needed in today’s environment, would that naturally translate to more women in the supply chain?

In addition, we sponsored a day during the recent SCM World Live conference devoted to the topic of women in the supply chain. Kevin O’Marah wrote a summary of the day titled ‘Women in supply chain: a bias for action’ in which he comments that his key take-aways from the day were the need for:

As you can imagine, this list generated quite a lot of debate, particularly the questions of quotas. Christina De Luca, VP of Procurement and Supply Chain for BP, was very articulate in stating that the quotas of the 1970s, when she started working, were wrong in that all they looked at was filling a certain number of positions with women. In Christina’s view the characteristics that we look for and the criteria we use to select people has to change because these have been skewed towards men. Her view, with which I agree, is that, when compared with the 1970s, or even the 1990s, business is now operating in a much more volatile world. And it’s not going to change. To quote her from the session:

That predictable, stable world which allowed us to make decisions in isolation, hierarchically, is gone. It requires a way of working, a skill set that is completely different. We need to talk with and collaborate with colleagues and competitors.

I agree whole heartedly. As Kevin Shriver of Land O’Lakes said on a panel, if more than 50% of the population is women and less than 20% of the people in senior supply chain positions are women, then by default we cannot be hiring the most talented people.  This gets us back to the issue of the characteristics that we look for and the criteria we use to select people. By a show of hands in the room at the SCM World Live event, a very clear majority of the women, which by definition are women who have risen to high positions in a company, had husbands who had stayed at home with the children so that these women could devote the time to climb the corporate ladder.   On a personal note, my wife and I made a more traditional decision, so, given that I am married to a very bright and capable woman, I am more concerned by the reintroduction of women into the workforce after an absence for child rearing, be that 1 year or 18 years. I asked a few women sitting around me about this and they all placed the onus on the women to explain their absence from the work force and articulate the transferable skills gained from their time at home. I disagree. What is required is for HR departments to value the multi-tasking, agenda setting, rapid trade-off analysis, and appeasement skills that are inherent in raising kids and running a household. Are we labeling by gender when we should be defining by characteristics? The question is if there is genuinely a difference between men and women. I think it is best to use an approach that focuses on the characteristics desired rather than to label these characteristics particular to women or men. Having said that, I have always been fascinated by the work of Geert Hofstede on ‘cultural dimensions’ dating from the 1970s, but continue even today. His work has its own detractors and adherents, but what I find interesting is his comparison of different ‘cultural dimensions’ across countries, the dimensions being:

Power distance index (PDI): "Power distance is the extent to which the less powerful members of organizations and institutions (like the family) accept and expect that power is distributed unequally." Cultures that endorse low power distance expect and accept power relations that are more consultative or democratic.

Individualism (IDV): "The degree to which individuals are integrated into groups". In individualistic societies, the stress is put on personal achievements and individual rights. People are expected to stand up for themselves and their immediate family, and to choose their own affiliations. In contrast, in collectivist societies, individuals act predominantly as members of a lifelong and cohesive group or organization (note: "The word collectivism in this sense has no political meaning: it refers to the group, not to the state"). People have large extended families, which are used as a protection in exchange for unquestioning loyalty.

Masculinity (MAS): "The distribution of emotional roles between the genders". Masculine cultures' values are competitiveness, assertiveness, materialism, ambition and power, whereas feminine cultures place more value on relationships and quality of life. In masculine cultures, the differences between gender roles are more dramatic and less fluid than in feminine cultures where men and women have the same values emphasizing modesty and caring. As a result of the taboo on sexuality in many cultures, particularly masculine ones, and because of the obvious gender generalizations implied by Hofstede's terminology, this dimension is often renamed by users of Hofstede's work, e.g. to Quantity of Life vs. Quality of Life.

Indulgence versus restraint (IVR): The extent to which member in society try to control their desires and impulses. Whereas indulgent societies have a tendency to allow relatively free gratification of basic and natural human desires related to enjoying life and having fun, restrained societies have a conviction that such gratification needs to be curbed and regulated by strict norms. 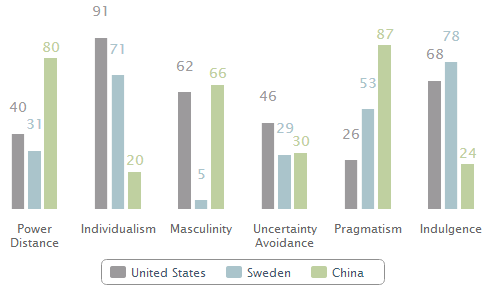 In reality, many of these dimensions are interlinked and, for example, in many cases cultures with a high Masculinity index also have a high Power Distance Index. But the actual values are of little value if not compared to other countries/cultures.

Of course, the most obvious connection to the topic of women in supply chain is the Masculinity dimension, and, by inference, the degree of ‘femininity’ in the culture. As defined by Hofstede, Masculinity is characterized by competitiveness, assertiveness, materialism, ambition and power, which, in my opinion, is at the heart of dysfunction in the supply chain, and precisely not the characteristics described by Christina De Luca as necessary for the modern supply chain. 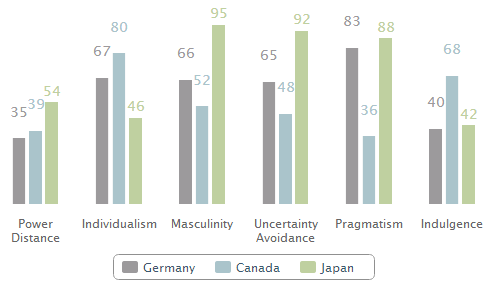 It bothers me though that Hofstede uses the term Masculine to describe only one dimension.  For example, I would rate Sweden more ‘female’ because by comparison it rates low on Power Distance and Masculinity and high on Pragmatism and Indulgence. Canada is more confusing because it rates high on Individualism, low on Pragmatism, and high on Indulgence. Eva Wimmers, CPO of Deutsche Telekom, one of the keynote speakers at the SCM World conference used the following diagram to differentiate between female and male leaders. I like the fact that she used quotes around the terms to indicate that these are not gender stereotypes, but rather characteristics of different personality types. 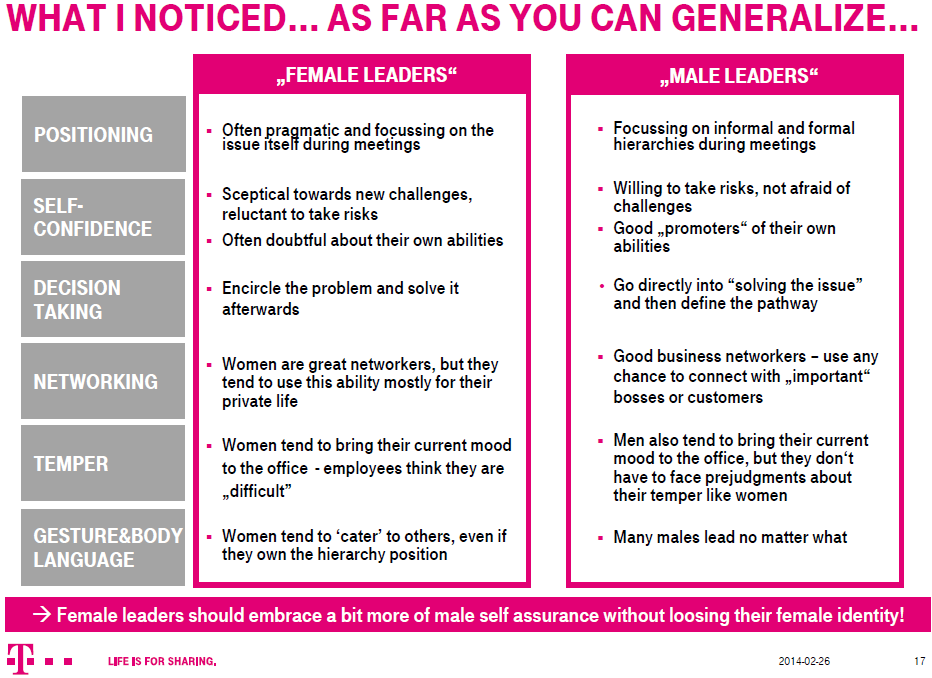 As you can see, there is a strong similarity between the characteristics Eva Wimmers uses and those promoted by Hofstede, but Eva is closer to my way of thinking that it is the sum of the characteristics that determines the type. So are quotas the right approach to redress the imbalance of women in the supply chain? I agree with Christina Da Luca that the approach to quotas needs to be different. On the other hand, there needs to be a goal, an objective against which we can measure success. Whether we call these goals quotas is a matter of semantics. But quotas without a change in approach is unlikely to yield substantial and sustained improvements. And it is incumbent on us men to be active in this change of approach.  This was a key point Kevin emphasized on a number of occasions during the conference.

Abby Mayer
- March 05, 2014 at 11:12pm
Hey Trevor
I thought this analysis was super thoughtful. I'm not familiar with the Hofstede cultural dimension framework previously, but I found it be a very insightful way to examine the cultures. It got me thinking- Do more "female" oriented countries have less of a gender gap when it comes to supply chain? Does Sweden have more female supply chain leaders as a percentage of total compared to a more traditionally "masculine" culture? Not sure that data is out there, but interesting to consider. Thanks for your insights!
Trevor Miles
- March 06, 2014 at 10:20am
Hi Abby

I don't have specific numbers for the gender gap in supply chain in, for example, Sweden, but I do know that there is a higher percentage in the overall workforce. And definitely more women in parliament/government.

There are many reasons for this and my take is that choice should be front and center.

Regards
Trevor
Abby Mayer
- March 06, 2014 at 5:06pm
Cool. The US still have very severe gender inequality in our higher levels of government which mirrors our business environment. Makes sense to me that if Sweden is doing a better job in one upper echelon, they are probably doing a better job across the board. Will take a look at the links. Thanks!