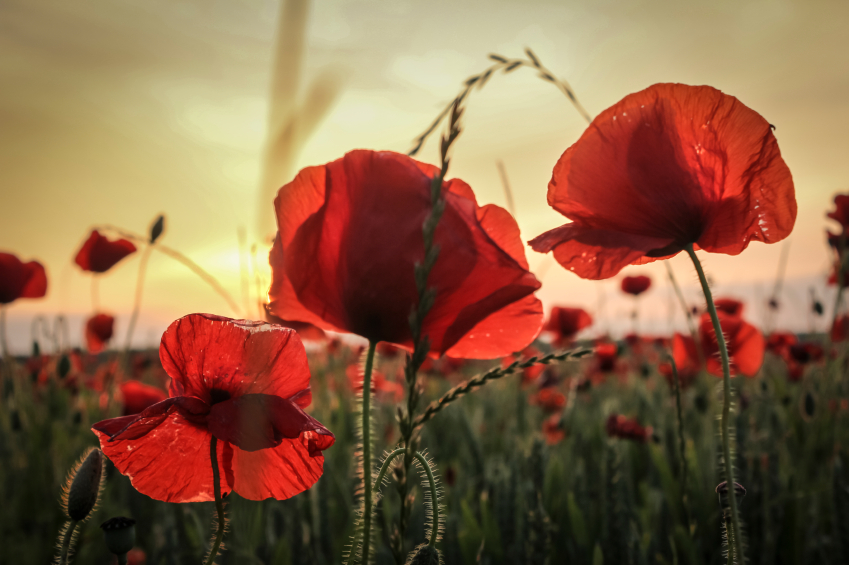 Today is Remembrance Day (also known as Veterans Day in the US). It is a day to honor and remember the sacrifices of so many who gave their lives, and continue to give them, to provide a world where peace is a possibility. It is not a day to write about frivolous things like chocolate, or turkey, or houseplants, like I’ve done in the past. It’s a day to mourn those who made the ultimate sacrifice, praise those who fought to secure freedoms I have always had, and to be thankful that there are still so many brave men and women willing to march into armed conflicts across the globe to stand up for what is right. A blog looking at the poppy supply chain just didn’t seem like enough to honor them. So instead of examining the ins and outs of how that iconic red symbol of hope and sacrifice found its way onto your lapel, I thought I’d write about something a little more personal, even if it has less to do with supply chain.

Both my grandfathers were veterans of World War II. Both survived the war but returned home to their loving wives and families with deep scars. A story echoed by so many. For my father’s father, the wounds were extremely physical. A grenade explosion during a routine training exercise left him with a steel plate replacing a sizable portion of his skull. The damage substantial enough to leave him without a sense of taste, and reduced vision and hearing. He was one of the lucky ones. As a child, I’d been told how grandpa got that big dent in his head, skin now laying smoothly over steel. I understood it was a result of the war. What I didn’t comprehend was how difficult it must have been to save his life. The ability to get him quickly to army doctors, the limited availability of metal during those years, and the sheer number of medical essentials needed for the surgery and resulting recovery. A single misstep in any of those critical supply chains and I would not be here today as my own father was born years after the war ended.

For my mother’s father, the scars he bore were the kind you couldn’t see. Deep emotional cuts that left him silent and stoic on the subject. He was a navigator in the navy. He’d told me that much, but little else. The only story I ever remember hearing was about the night he thought they were about to be attacked by an enemy ship – only to find out they were preparing to go to war with an iceberg. I would smile and giggle in amusement, a small child tickled by the silliness of it all. I wonder now if that was the point. A dose of child’s laughter to banish the fear, and help ease the nightmares of it all. I can’t imagine the terror he must have felt as he silently raised the alarm, sending his crew mates to their battle stations, wondering if any of them would ever see another dawn. After his death, we found out that my grandfather had been involved in so much more than a nighttime encounter with an iceberg. He had been part of the Normandy invasion, the ship he was stationed on involved in the seaborne attack at Omaha Beach.

There is no way for me to comprehend what seeing that kind of horrific loss of life does to a person. I hope I never have to find out. I also hope that one day no nation will ever again have to worry about the logistics of getting troops and supplies to and from the battlefield. That no one will ever be tasked with finding ways to transport thousands of injured and fallen soldiers home to their families – or deal with digging the graves for those who were left behind. In honor of my grandfathers, Eldon Cheater and Gerald Wood, I will remember the sacrifices of our veterans today. I hope you’ll do the same. And just because I mentioned poppies at the beginning of this blog, please find below my favorite Remembrance Day poem. I hope it serves as a reminder of why it is so very important that we never forget.

Why Wear a Poppy

And held one forth, but I shook my head.

Then I stopped and watched as she offered them there,

And her face was old and lined with care;

But beneath the scars the years had made

There remained a smile that refused to fade.

A boy came whistling down the street,

Bouncing along on care-free feet.

His smile was full of joy and fun,

When she'd pinned it on, he turned to say;

"Why do we wear a poppy today?"

The lady smiled in her wistful way

And answered; "This is Remembrance Day.

And the poppy there is a symbol for

The gallant men who died in war.

And because they did, you and I are free -

That's why we wear a poppy, you see.

I had a boy about your size,

He loved to play and jump and shout,

Free as a bird, he would race about.

As the years went by, he learned and grew,

He was fine and strong, with a boyish smile,

But he'd seemed with us such a little while

When war broke out and he went away.

I still remember his face that day.

When he smiled at me and said, 'Goodbye,

But the war went on and he had to stay,

And all I could do was wait and pray.

His letters told of the awful fight

(I can see it still in my dreams at night),

With the tanks and guns and cruel barbed wire,

And the mines and bullets, the bombs and fire.

Till at last, at last, the war was won -

And that's why we wear a poppy, son."

The small boy turned as if to go,

But your son - did he come back all right?"

A tear rolled down each faded cheek;

She shook her head, but didn't speak

I slunk away in a sort of shame,

And if you were me, you'd have done the same:

For our thanks, in giving, if oft delayed,

Though our freedom was bought - and thousands paid!

And so, when we see a poppy worn,

Let us reflect on the burden borne

By those who gave their very all

When asked to answer their country's call

Then wear a poppy! Remember - and Give!