I was at the North American Supply Chain Executive Summit in Chicago earlier this week. I’m a pretty jaded conference goer, so it is difficult to please me, but I have to say that I was pleasantly surprised by the quality of the keynotes and sessions I attended. The general theme of the conference was about transformational change. What kept nagging at me though is that the presentations were largely about “righting the ship” rather than “moving from ship to air.” Undoubtedly there were many case studies on companies making huge leaps in performance, and great advice on how to get change. But I couldn’t help think that much of the advice was focused on doing well what we have been doing in supply chain for the past 20-30 years. I’m trying to determine what we will do differently over the next 10-20 years. Peter Gibbons of Mattel said we should focus on behaviors rather than culture. He said that in all companies there is a lot to be valued in the culture, but, more importantly, trying to change the culture will usually be met with strong resistance. Changing behavior is a lot easier, and if the behavior changes, the culture will change in the manner desired. Another great piece of advice from Peter is to focus on the outcome, the “what”, not on the method, the “how”. Perhaps most importantly though, was Peter’s view that you cannot get transformation without disruption. 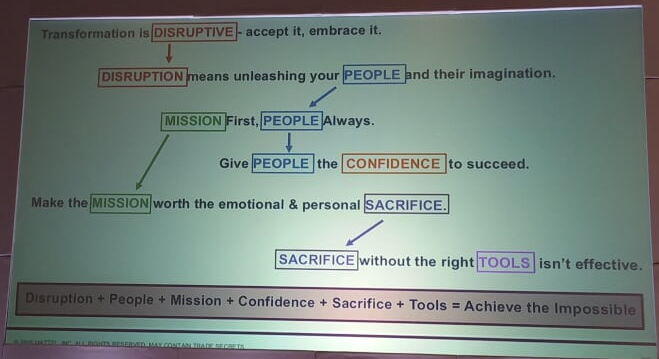 There were also really good presentations by Daniel Myers of Modelez, Paul Keel of 3M, and Viju Menon of Verizon. Something that I was really surprised to hear is that 3M was voted by millennials as one of the best places to work.

Undoubtedly the most inspirational presentation was by Reuben Slone of Walgreens. As Reuben said, he wanted to focus on the head and the heart of supply chain, the science and the art of supply chain. He spent a lot of time on the slide below, emphasizing that integrated planning is only possible with alignment and collaboration. At Kinaxis, we call this concurrent planning. His message of collaboration was very strong, essentially one of “You don’t understand someone until you walk in their shoes”. It was all about understanding the impact of your decisions on other parts of the organization, the head. And when he talked about the heart, it was also about empathy. 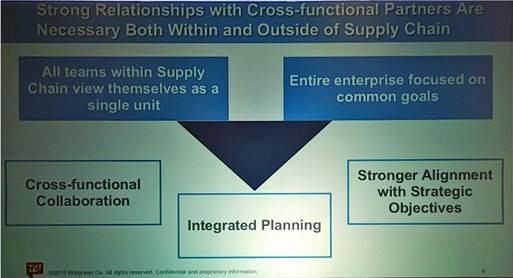 While Reuben’s “head” material was great, I found his “heart” material amazing. Walgreens has had an active program to recruit people with disabilities. Let us just start with language. I did not write “disabled people”. Instead I wrote “people with disabilities”. We are all people first, and then have characteristics. Reuben gave great statistics which I didn’t write down, but something like 10% of the population of the US has a cognitive disability of one form or another, and the unemployment rate is double that of people without disabilities. There are no support programs for them once they reach 18. Rueben said that this is morally wrong, in fact a crime. Not being a US citizen I hesitate to make a judgment in the specific, but I agree with him in general. According to DisabilityCompendium.org

Reuben showed a video during the conference that highlighted one of their distribution centers in which both workers with disabilities and their parents were interviewed. I looked for the video on YouTube but could not find the one Reuben showed. Instead I found this one . While it’s not the one Reuben showed during the conference, it refers to Walgreens’ program and gives a good sense of the key message in his presentation: employing people with disabilities makes good sense for the heart and the head. Well, the wallet actually. But still the most insightful presentation to me was given by Matthew Wallace of PVH Group on “Attracting and Developing the Next Generation of Supply Chain Talent”. Matthew decided he knew nothing about this topic so it was best to ask people who did. He went to three people in their mid-twenties who work for PVH, which I found interesting. While the content itself was not earth shattering, what I found interesting was his message about the baby-boomers, and even Gen-X needing to listen to the millennials rather than telling them how to conform to our ways of working. The most striking point he made was that he is installing a reverse mentoring program in which each of his 14 direct reports will have a mentor who is a millennial by the end of the year. I’ll be keeping in touch with Matthew to find out which side changes most, the millennials or the baby-boomers. But, I am still left with my fundamental question unanswered: How will organizational structures and work practices change with the introduction of new generations and new technologies? One thing I know for certain is that, as Einstein said, doing the same thing over and over and expecting different results is the definition of insanity. And yet we continue to perpetuate organizational structures and work practices that were established in the Industrial Revolution based upon military concepts of command and control. And then we ask ‘Why has deploying modern technologies not brought about the financial and social benefits imagined?’ It’s because we haven’t adapted our organizational structures and processes. When I need new ideas I turn to TED. The first talk, by Yves Morieux, addresses many of the inefficiencies of existing architectures and the stupidity of addressing modern complexity of business with complicated work practices. His observations can be applied directly to how we go about supply chain planning, and have a direct parallel with the observations of Reuben Slone. I much prefer Yves use of the word “cooperation” rather than “collaboration”. It immediately brings home the need for trade-off across competing metrics and objectives.

The second is by Ian Goldin. Ian is more of a futurist, though I only have a link from 2009. Ian has written a number of books, his latest being “Age of Discovery: Navigating the Risks and Rewards of Our New Renaissance”.

There are two great podcasts on CBC (here and here) in which Goldin’s co-author, Chris Kurtana, is interviewed about their views and the future of work. I’m only hoping that I will work long enough to experience this new world in which technology, coupled with new ways of working, will address some of the big problems we are faced with, starting in the workplace. For that matter, maybe even the idea of a workplace is outdated. As Peter Gibbons said, “Transformation is disruptive – accept it, embrace it.”