As discussed in Part 1 and Part 2 of the "Truth, Lies, and Statistical Modeling in Supply Chains series, systems rarely exhibit variability that follows a Normal distribution, even though very often we base our inventory policies on the assumption that both demand and supply lead times follow a Normal distribution.

In this blog, I want to address the issue of the effect variability has on capacity needs. This is where Queuing Theory comes in handy, though let me start by admitting that Queuing Theory can only take us a little way down the road of understanding some fundamental principles and is next to useless to evaluate and manage something as complex as a supply chain. In fact, the mathematics for anything more complex than even a single server and single arrival is daunting, and even then we need to make some pretty radical assumptions. But, nevertheless, there are some really valuable ideas that come out of this analysis. As I mentioned way back when in a blog titled “I am adamant that an accurate forecast does not reduce demand volatility”, my first degree was in Chemical Engineering, a rigorous and very mathematical course that does not admit to any randomness in the chemical processes.  As a consequence, when I took a course in graduate school in which the lecturer asked us on the first day how long the queue/line would be if she took about 1 minute to check our IDs and people arrived to the class at approximately 1 person per minute, my immediate reply was that there wouldn’t be a queue because the moment she was finished checking one ID the next person would arrive. 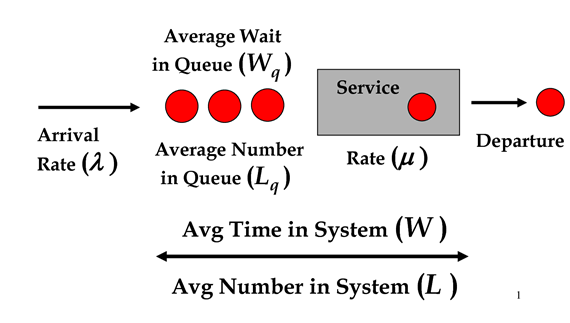 Wrong. Because of those words ‘about’ and ‘approximately’.  So let’s dive in and see what this means. To make the mathematics at least workable we need to make 2 major simplifying assumptions, namely that people arrive at class completely randomly – no friends walking to class together – and that it takes next to no time to check most IDs but occasionally it takes a long time to check an ID. In other words, the time it takes to check the IDs follows an Exponential distribution with an average service time of 1 minute. So, an Exponential distribution has a similar shape to a LogNormal distribution with a high Coefficient of Variation (CoV). In fact, the time between people arriving to class will also follow an Exponential distribution. In the diagram we can see all the elements and characteristics of this very simple Queuing System where:

We can then derive equations to calculate all the other resultant characteristics of Wq, Lq, W, and L. This is where assuming an Exponential distribution comes into play because assuming a distribution with a more complicated probability density function makes it really difficult – some would say impossible – to derive the equations for Wq, Lq, W, and L.  In the case where both arrivals and service follow Exponential distributions these are:

In the example above, µ = 1 and λ = 1 therefore (µ - λ) = 0, meaning that all the characteristics above will be infinite.  In other words, the queue will grow infinitely, as will the waiting time in the queue. This was pretty counter intuitive to me and it took me a long time, and many hours in the computer lab, to accept that this is correct. Let’s look at the problem from a different perspective. How quickly do we need to be able to check the IDs to ensure that there are no more than 10 people in the queue? Well, we have to formulate the question slightly differently, namely that the probability that there are “k” or more people either in the queue or having their ID checked is:

So, the probability that there are fewer than “k” people in the queue is: 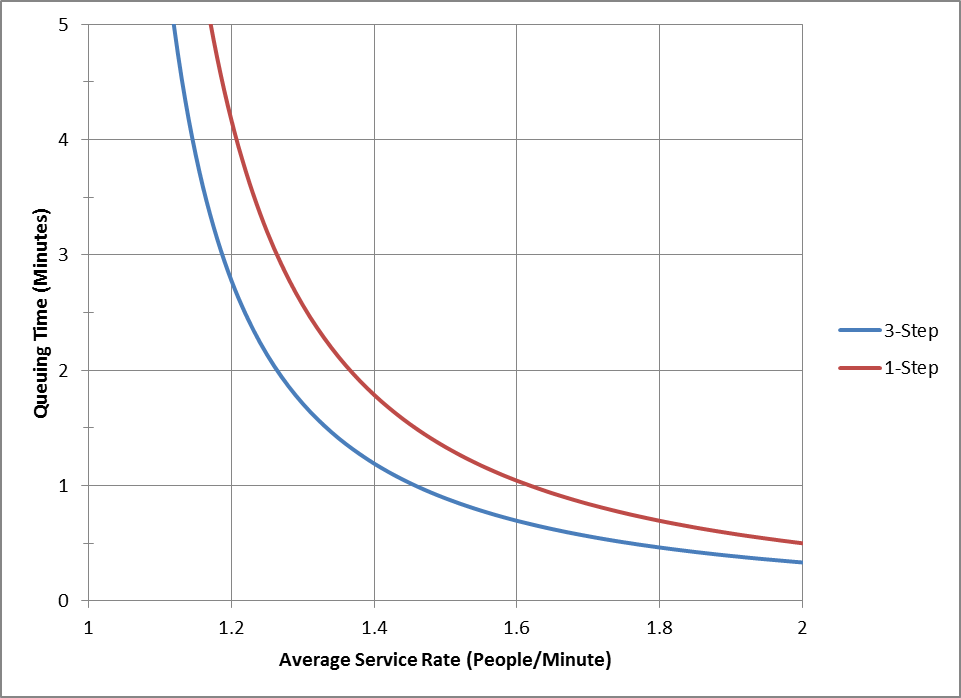 Navdeep Sidhu
- April 10, 2013 at 10:17am
The tricky part is that real life and mathematics don't always concur on what should happen and what actually happens! You can predict anything and still have a wrench in the system ruin all your careful planning. That's why those buffers are so important. They can absorb at least a portion of the disruption and give you room to catch up.
Trevor Miles
- April 10, 2013 at 2:10pm
You are correct Navdeep. But in the inexorable drive for better financial performance, the question is how small can you make the buffers while still having a viable operation. My contention is that as you reduce buffers you need to pay more attention to the aspects that Lean calls 'Time to Detect' - know sooner - and Time to Correct - act faster.

So if it takes you a week to realize in customer facing roles that there is a 'wrench' in production, you will need big buffers. But it only takes a few minutes, you will need smaller buffers.

Regards
Trevor
K.Tamsaout
- June 07, 2014 at 2:09pm
I am a trainee and I am working on Inventory control. In the company where I am doing my training, i found that 97% of the stocked item have a COV greater than 2. When i read your article, and knowning that the company uses an inventory model that assumes normal distribution for demand and lead time, i wanted to see if the lognormal wil lead to inventory reduction. My question is: if the lognormal distribution is more suitable in this case, how can we calculate Reorder point?
Trevor Miles
- June 18, 2014 at 6:01am
Hi K

The answer is to use segmentation analysis to identify the customers or regions that contribute to the long tail. And then use postponement for the 'long tail' to the right of the mean. This may increase delivery lead times or cost fi you use a faster delivery mechanism. You can then remove that demand from the analysis of the inventory needs at a forward location and only focus on the demand around the mode of the LogNormal. This will reduce your inventory tremendously, but increase either your delivery lead time or cost, for some demand.